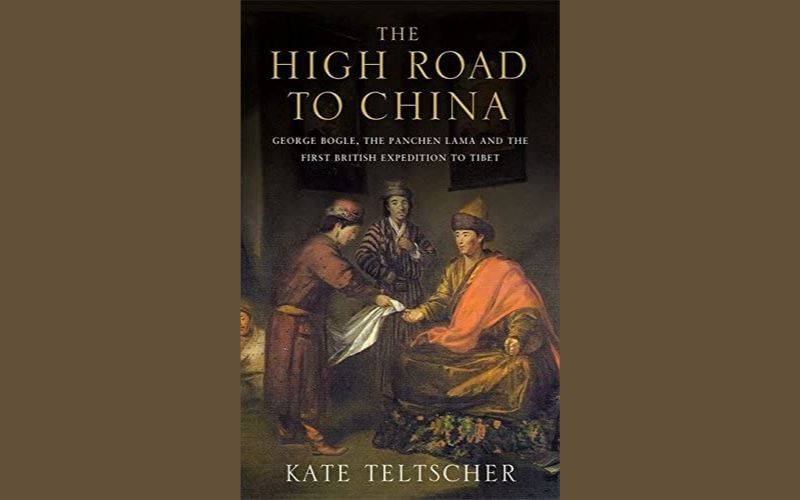 The Great Game that occurred before the so called ‘Great Game’ (19th century at the Himalayas between Imperial powers) is one of the major themes of this book.

This book embodies the journalistic and almanac essence, bringing us at the crossroads as to how the Tibetans for the first time in their recorded and known history interacted with a western power, that was the Britishers of the East India Company in the 18th Century.

The author further elaborates upon the 3 centers of power (namely Calcutta, Tashi Lhunpo and Peking) and meticulously details the diplomacy that took place, that too in the 18th century. One must keep in mind how during this period A. The Britishers were not officially governing India but rather was the East India Company. B. The Qing dynasty that ruled over China then had a strong hold over the people, especially under Emperor Qianlong. C. Tibet during this period was going through a phase of Regents - where the Dalai Lamas never got to govern Tibet officially as several of them (9th to 12th Dalai Lama) passed away when they were young and so it fell to the Panchen Lama to assume spiritual as well as temporal leadership during these times. Hence, the setting of this book is on mark whereby the British East India company wanting to open relations with Tibet also gets to make the desired contact with China through the late 3rd (6th another way of counting which we all follow currently) Panchen Lama, Lobsang Palden Yeshe who incidentally shared a strong relationship with the advisor to the Emperor Qianlong, Chankya Rolpae Dorje.

The thing to take away as an international relations and political science students was how the various levels of diplomacy was taking place here. Even in an era where postal and other form of communication service was still in its infancy, the charismatic leaders took their role seriously and had others means of communications to get the point across the table. The author mentions the form/mode of diplomacy as one that operated around personal alliances and cultural understanding, and it truly adheres to resonate with the events of that particular century.

A point mentioned by the author that is still relevant today in our Tibetan community that is in exile is the extraordinary cluster and concentration of religious authority within particular sections of nobles. I still to this day do not understand and grasp how Tibetan Buddhist religious reincarnations are concentrated among few families. Does this mean there is a real question of legitimacy when it comes to reincarnated lamas popularly referred as Tulkus? Or has it something to do with wealth consolidation. A thought that some western scholars point out and expounds how the first reincarnated Tibetan lama, the Karmapa was initiated due to the fact that his followers wanted to concentrate the wealth and not let it filter/peter out eventually. The Tibetan tulku system is a highly contentious issue as it revolves and centers around faith but the author highlighting it here shows how she is able to grasp the Tibetans way of life as well. And it is of no surprise to an extend how due to such a concentration of tulkus within a family, there is several infightings between them when one or the other passes. This is shown by the true incident of fighting between two of the 3rd Panchen Lama’s brothers (Shamar Rinpoche and the Regent of Tashi Lhunpo) which eventually led the Nepalese Gurkhas in looting Tashi Lhunpo and invading Tibet at the behest of Shamar Rinpoche. This family affair eventually became an issue beyond national borders and had Emperor Qianlong sending in hundreds of Manchu troops into Tibet to dispel the Gurkhas, which eventually furthered their influence in Tibet.

Though this book is a narration by the author, a major chunk of it is derived from the Journal kept by George Bogle, who is the main protagonist here. The journal written by a witty Scotsman who served the East India Company was one of the most versed journal entries about Tibet then and was even used by Francis Younghusband who led the 1st official British expedition to Tibet in 1904. The nagging but commonly used maxim of ‘understanding the unknown through drawing yardsticks from similarities’ was at full flow here. Bogle would constantly keep his thinking (European) astute and compare it with the Tibetan way of life in understanding them. However, Bogle unlike his counterparts went a step beyond them and he gradually started to appreciate the non-western culture and immerse himself in it. He even goes as far as to state how the instead of Roman Catholics influencing Tibetan Buddhism, it was the Tibetans ritual and religious practices that influence Roman Catholics and Christianity at large. The celibacy of the clergy, the counting of beads and the merit of pilgrimage are just few of several examples regarding the religious exchange taking place here. Bogle in many ways become the first Britisher and even westerners to grasp the Tibetan culture and tradition, appreciating for what it was/is instead to looking down upon it.

With everything set up for a tryst that would have brought seismic changes to the geopolitics in Asia as a result between the cordial relationship between Tibet-British India-China it all came to naught. This being due to the unwarranted death of the two most vital individuals who were crucial in establishing this close network between nations. The 3rd Panchen Lama, Lobsang Palden Yeshe’s mysterious death when he in Beijing to celebrate the 80th Birthday of Emperor Qianlong immediately followed by George Bogle’s death four months later, completely dismantled the hard worked channels of communication created in the Himalayan corridor even extending as far as Beijing if things were to fall into pieces.

Because of these significant unplanned phenomena, the relationship and means of interaction between Tibetans and the western world in the 18th century remained largely hidden. Even the British East India Company were reluctant in publishing the journal written with great vigor by Bogle during his mission to Tibet. It was only during the early 20th century when the Britishers had complete hold over India and was ruled under a Viceroy that they set their sights to the Himalayas once again. And it was then, the leader of the British expedition Francis Younghusband utilizes the journal by Bogle as a trusted guided when venturing in to unknown terrains.

The author did her best in bringing out what Bogle wanted to share to the world and that is what is important while reading this book. It is a treasure full of knowledge that must be shared rather than kept locked in the annals of history like Bogle’s own writing until it was revealed only some centuries later.

Some Facts: (Arisen from this book)