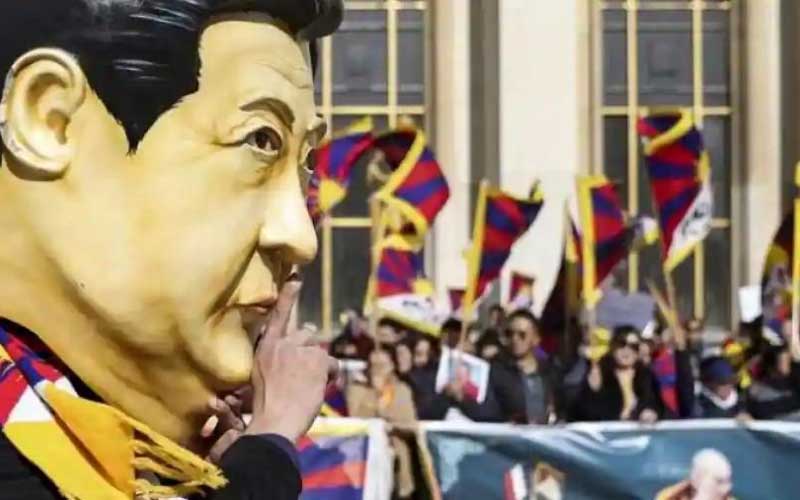 China’s Policy of Preemption in Tibet: An Ominous Future?

Xi Jinping’s centennial goal of building a modern and socialist China, based on the ideas of national rejuvenation and national unity, has Tibet as its core driver in more ways than one. As it continues to tighten its grip on Lhasa through brutal Sinicization tactics, Beijing has earned the ire of the global community and the Tibetans alike for attempting to erase Tibetan identity, culture, language and religion. Xi’s visit to Lhasa last year in July also reinforced the aim of China to build Tibet into a socialist entity with Chinese characteristics to achieve national rejuvenation.

Simultaneously, Chinese efforts on fake narrative-building with a focus on bringing out the positives of Chinese policies in illegally occupied Tibet and manipulating historical facts to justify its occupation of Tibet, reveals its craving for ‘legitimacy’.

These two disparate goals, thus, seem to expose a huge dichotomy on China’s part - something they have been trying to fix by controlling the institution of the 11th Panchen Lama and failing miserably. A deep analysis of China-appointed Panchen Lama Gyaincain Norbu’s public image reveals that he has failed to garner the local and foreign support of Tibetans over the years.

Moreover, this trend portends something else as well - that China will now aggressively focus on controlling the reincarnation process of the current and the 14th Dalai Lama by building global credibility and support around the same through its Faith and Buddhist Diplomacy on the foreign front. At the same time, on the domestic front, it seems that the United Front Work Department (UFWD) will ramp up its efforts to exercise greater control over Tibet on the domestic front.

After the 10th Panchen Lama’s death in 1989, the 14th Dalai Lama Tenzin Gyatso had identified 6-year old Gedhun Choeki Nyima as the 11th Panchen Lama. Subsequently, the People’s Liberation Army abducted the 6-year old Lama and his family, with their whereabouts still unknown to this day. Instead, Gyaincain Norbu was recognized as the ‘official’ 11th Panchen Lama by the Chinese government in 1995 - a move since then decried by His Holiness the 14th Dalai Lama and the Tibetan community alike.

The institution of the Panchen Lamas is considered only second to that of the Dalai Lama in spiritual importance in the Gelug school of Tibetan Buddhism. While HH the Dalai Lama had already taken refuge in the hill town of Dharamshala in India in 1959, thus effectively being outside the control of Beijing, China indeed wanted to make sure to pursue control of the institution of the Panchen Lama to exert legitimacy for its illegal occupation and rule in Tibet.

Since his appointment as the 11th Panchen Lama by China in 1995, Gyaincain Norbu has been presented as the ‘face of Tibetans and Tibetan Buddhism’. Having been brought up in Beijing since his childhood in a ‘Chinese way’, PRC has campaigned hard for Norbu - he was also appointed to the Chinese People’s Political Consultative Conference (CPPCC) in 2010 and Vice President for the Buddhist Association of China. Over the years, Norbu has undertaken numerous domestic and foreign trips as a Chinese puppet and made various speeches to talk about Buddhism, Tibet and China. In doing so, it seems that he has failed to win the admiration of Tibetans and the Chinese alike.

According to reports, Gyaincain Norbu as the 11th Panchen Lama is not seen on posters around Tibet, with his predecessor the 10th Panchen Lama being more visible. This in turn reflects that the Tibetans have not exactly accepted his appointment as legitimate. It is curious to note that Tibetans continue to be put behind bars for putting up posters of HH the 14th Dalai Lama, indicating that he still enjoys wide popularity and acceptance as the spiritual leader of Tibetans across the world.

Despite this, China continues to exaggerate Gyaincain Norbu’s popularity and influence via disinformation campaigns - praising his English-speaking skills at a Buddhist Conference and using him to brainwash Tibetans to tow the Communist Party line in the last few years.

While legitimacy is the prime goal that China has been pursuing via Gyaincain Norbu’s appointment, there has also been speculation that Beijing sees him as a future replacement for the 14th Dalai Lama and that this is the reason that he is being portrayed as the face of Tibetan Buddhism over the years. However, this speculation has been rife with contrasting arguments about his influence and political role.

Xiao Jie, an Assistant Fellow at the Institute of Contemporary Studies at the China Tibetology Research Center, had stated in 2020 that he does not see the Panchen Lama having an important role in the politics of Tibet and China, further commenting that religious leaders in China are developed under the leadership of the the Communist Party.

But, over the years, Gyaincain Norbu has undertaken important domestic and foreign trips, delivering speeches about building a Tibet with Chinese characteristics and asking Tibetans to stay away from ‘separatists’, indicating his importance for China as a Tibetan mouthpiece.

And that brings us to this conclusion - that for China, Gyaincain Norbu as the 11th Panchen Lama, is only a means towards an end. He is a mouthpiece that helps them to do China’s bidding. The fact that they tried to portray him as the face of Tibetan Buddhism early on and failed, is something China knows. Hence, his limited appearances and role in Chinese and Tibetan politics. This also becomes evident from the fact that China still leaves the administrative and security control of Tibet to its Han Chinese officials, with the importance of the Panchen Lama only limited to imagery and symbolism.

Assessing the threats: An Ominous Future?

If one wants to understand China and its policy in Tibet, it can be narrowed down to one term - pre-emption.  This is what they did in 1959 during the Tibetan Uprising and this is what they did when they appointed Gyaincain Norbu as the 11th Panchen Lama.

China’s self-awareness of their failure on the Panchen Lama front, thus, seems to portend an ominous future for Tibet. It will not be an exaggeration to say that in fixing this mistake, they are now looking at another pre-emptive move - controlling the reincarnation process of the Dalai Lama. And they will do so in more ways than one, especially by using their Faith and Buddhist Diplomacy. The major aim of China would be to build a global Buddhist coalition that will support its choice for the future Dalai Lama and generally hold a positive view of China’s occupation of Tibet.

In this regard, China has employed the Buddhist Association of China (of which gyaincain Norbu also serves as the Vice President) to hold the World Buddhist Forum since 2006. The last known World Buddhist Forum was held in 2018 in Fujian (south-east China) with over 1000 Buddhist scholars, monks and representatives from over 55 countries.

What is interesting about these Forums is that since its inception in 2006, the most revered Tibetan Buddhist, HH the Dalai Lama, has been excluded from participating in it. Moreover, Chinese officials and Gyaincain Norbu continue to label the Dalai Lama as a ‘terrorist’ and ‘separatist’ at these Forums, clearly indicating that they are using the Forum to build Buddhism with Chinese characterists and eroding the religious freedom of Tibetans. And it will certainly be logical to conclude that the next World Buddhist Forum will once again have such ulterior motives around Tibet.

Similarly, China is also using its proxy Pakistan for conducting covert Buddhist and Faith Diplomacy. Recently in March 2022, Pakistan hosted the International Conference and Art Festival for promoting Social Cohesion and Interfaith Harmony. It was interesting to note that various panels of the Conference held discussions on China’s Maritime Silk Road with references to Xi Jinping’s Belt and Road Initiative. Additionally, the Conference’s title also talks about promoting ‘Interfaith Harmony’ while China continues to erode religious freedom in Xinjiang and Tibet. This also indicates the use of such conferences and forums in portraying countries like China and Pakistan as upholders of religious freedom in stark contrast to their human rights records vis-à-vis religious minorities, while exposing Chinese influence in such conferences. The conference has the International Institute for Central Asia Studies as a partner, which happens to be a China-backed center under UNESCO. It is no secret that Beijing has, over the years, used its financial prowess to buy influence in the United Nations and the various organs under it - the fact that it is still a part of the UN Human Rights Council is a testimony to this fact.

China has also stepped up its Buddhist outreach to Sri Lanka, which remains a major Buddhist nation and is also being targeted by Beijing under its Debt-Trap Diplomacy. Interestingly, China is also using Gandharan Buddhism in Pakistan to lure Sri Lankan Buddhists to historical sites like Taxila and Gandhara to promote Pakistan as the originator country of Buddhism in contrast to India, which remains the birth-place of Buddhism.

At the same time, China’s internal control over Tibet affairs via the United Front Work Department (UFWD) will also hold a key for Beijing to maintain a tighter grip over Lhasa, in addition to their foreign outreach on the same mentioned above.

In 2019, it was reported that the UFWD had undergone major restructuring as per Xi Jinping’s instructions to cater to CCP’s domestic and geopolitical objectives of maintaining a tight control over the country's minorities. UFWD is widely known as the CCP’s main organ to exercise control over Tibet, especially its religious affairs. Thus, the increase in human rights violations in Tibet since the last 3-4 years coincides with the UFWD restructuring, exposing the role of the body in CCP’s Sinicization plans for Tibet.

With the recent rise in self-immolations after a gap of 3 years and the overall jump in the Tibetan resistance to China’s illegal occupation and cultural genocide in Tibet, there are high chances that China will step up its foreign and domestic efforts in crushing the movement via UFWD and diplomatic outreach through Faith and Buddhist Diplomacy. And a central goal of these efforts will be to remove HH the 14th Dalai Lama from the equation and control the reincarnation process by undertaking a well-coordinated strategy that already seems to be in play.

A final question that comes to mind after considering these possibilities is that will Tibet now face a more brutal China in the future? Yes, indeed. Given the pattern of Chinese actions on Tibet clearly point towards an ominous future for Tibet.

It is high time that the world wakes up to the Chinese overtures towards Tibet and the first step in doing so will have to be taken by governments and media houses. The reporting on Tibet and the physical access to the Tibetan plateau continue to be the two major challenges in this regard. As China builds up its global coalition for its notorious plans, nations believing in a rules-based order and the ideals of freedom, democracy, liberty, equality and fraternity should come together as an opposing force against Beijing.