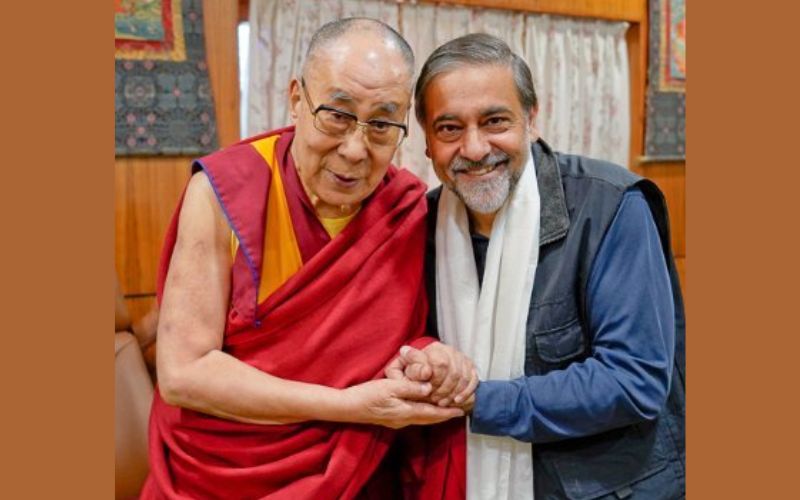 Dalai Lama : An Embodiment Of Compassion And Clear Thought

I lost my wife, Tavinder, to cancer in June 2019.  It was completely devastating, because she was everything to me, someone I considered my soulmate.  What kept me going was her wish that I dedicate the rest of my life to preventing people from suffering the way she did and to help others.  She knew that this is the only thing that would give me purpose.

Tavinder was a devotee of His Holiness and cherished his values — and these are what have given me the strength to go on in life.

With the help of some brilliant scientists and oncology researchers — the same people who tried to help save Tavinder — I developed a grand plan that I believe may lead to cancer cures.  It uses technologies such as genomics, synthetic biology, organic drug synthesis, and artificial intelligence and creates open-sourced data on an unprecedented scale to try to address many cancers and other conditions for which we currently have no adequate treatment. And it provides a platform for holistic treatments such as those HHDL advocates.

But I realised that the plan was so ambitious and radical that the U.S., with too many vested interests in the status quo, can’t possibly implement it.  To overturn the medical industry will take countries such as India, which has people in desperate need and leaders ready to think big.  So, after developing this plan, I went to India to meet His Holiness The Dalai Lama and Prime Minister Narendra Modi.

What I really hoped for more than anything from His Holiness were his blessing for Tavinder.  His Holiness gave this blessing and much more; it was an incredible, spiritual experience.  I was able also to be at His Holiness’s side, at his residence in Dharamshala, for 1 ½ hours and hear his advice to 300 others.  He listened carefully to everyone, reflected on their needs, and offered thoughts touching in their wisdom.  I was amazed at how much he really cared and at his true compassion.

His Holiness talked about everything from agriculture to medicine to public policy and quantum physics.  (I did not realize that this had its roots in India; so many of today’s scientific advances came from there.)  He fully understood the power of advanced technologies and the value of traditional medicines.  And in response to my own thoughts, he offered to host a global conference of scholars to discuss the role of Ayurveda and Tibetan and Chinese traditional medicine in treating cancer.

I came away realising that His Holiness not only has a deep understanding of modern and traditional sciences but is also an embodiment of compassion and clear thought.

With His Holiness’s inspiration and the support of the Prime Minister, a world-changing project was launched in Kerala in late 2020 called Karkinos Healthcare. It implements the key ideas of the grand plan and creates a comprehensive and distributed cancer network for India. It is already helping tens of thousands of people in South India and will soon help millions all over India and abroad — and provide a foundation for global research that could lead to natural and allopathic cures for cancer and other diseases.

On the occasion of His Holiness’s 87th birthday, I want to thank him for all he does for humanity — and for the inspiration he provides to all of us.

(Vivek Wadhwa is an academic, entrepreneur, and author of five best-selling books: From Incremental to Exponential; Your Happiness Was Hacked; The Driver in the Driverless Car; Innovating Women; and The Immigrant Exodus. Vivek is based in Silicon Valley and researches, speaks, and writes about advancing technologies that are transforming our world.)