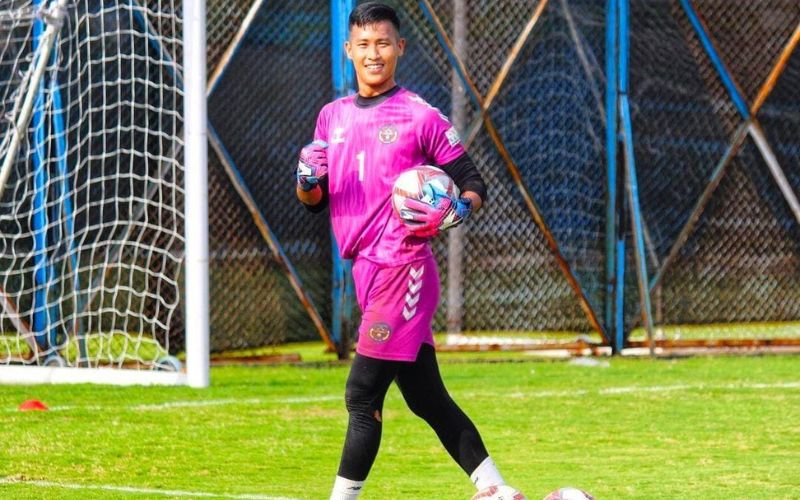 We need more Tibetan footballers playing at higher level: Tenzin Samdup on 2022 World Cup, his love for the game and his dream project

Tenzin Samdup is a professional footballer who plays as a goalkeeper for Mumbai Kenkre in the I-League. Born in India, he represents the Tibet national team.

How did you first get introduced to the sport of football?

I would say from my dad, I vaguely remember the 2002 World Cup where Brazil beat Germany by 2-0. I watched the final game with dad and ever since I have been a fan of Brazil and became a disciple of this beautiful game.

Who is your biggest role model in world football?

Hands down Ronaldo, I have so much love and respect for him.

What do you think makes a good football player?

I would say his hunger to be more, being consistent and of course his attitude.

What are the biggest sacrifices you have made to pursue your career?

There has been many but it’s not much of sacrifices but more of investments. That is how I look at it and it’s an everyday thing, from the smallest thing as sleeping on time to things as testing your comfort zone every training. It’s a never-ending journey.

What obstacles or challenges have you faced in your career so far?

This is a tough one, I am not sure from where to start because this never ends and that’s the best part about it. The challenges keep you on your toe and pushes you to be more. First major hurdle was to get into a professional setup and that took me years. We know we don’t have the guidance so it was like taking shots in the dark and oh boy!! I took so many TBC before I landed my first professional contract with Chennai city FC, together we became the champion of India.Then there not getting game time, fighting yourself to be in that headspace, to stay motivated every single day, to keep yourself going. To answer yourself “why choose you!” And to have that self-belief is a a lot of mental strength that’s required so yes, it’s still going on and with every passing day, there will be a new challenge. We just got to embrace it and take it head on.

What is the most challenging thing about being a professional football player?

Mmmm I think the previous answer says pretty much about it but to add I would say being consistent. Day in and day out how you push yourself to be better is a really difficult task.

Do you have any funny or interesting stories from your time playing football that you can share with us?

Hahaha footballers in general do silly things so it would be embarrassing to say the funny bits but I will share one interesting one that’s very close to me. I remember when we (Tibet National team) were to play Mohan Bagan in quarterfinal and spectators were shouting at us and especially me saying “A dozen would be less for the goals we will concede against them” and “bring a bigger bag”. However, those very people gave us standing ovation at the end of the game, the whole stadium did when we lost the game 1-0 with them scoring a clutch goal at 90+3 mins. It was one of the most beautiful moments of my life to see our flags being waved in the stadium.

If you could go back and change one thing about your time playing football, what would it be?

I would go back and probably start much sooner and probably wouldn’t listen to my parents when they asked me to come back and finish my degree haha. Starting late is my biggest regret, THE BIGGEST.

Could you tell us something about your dream project?

Ahhh! This is something I have always wanted, more Tibetan playing at higher level. To change the mindset of our people and make them see that it’s not only academically through which a child can have a future. We only focus on formal education but outside that, there is much bigger world that’s begging us to explore. This project is my very sincere attempt to bring about a change, a change long due. It will focus on growth and development at grassroots level, I want to create a place where children can grow and thrive and hopefully create a pathway for aspiring young ones into Indian football system. From inviting qualified coaches but also give jobs to Tibetans who have done coaching licence but are staying idle at home. This would encourage youngster’s boy or girl to take up coach. Take up coaching licenses, which aren’t very tough courses. That way we will have people who not just can be a part of this project but help Tibetan football in their respective shichaks.

What values or lessons did you learn from football that you carry with you off the field?

There are things that football and sports teach you if you take it seriously. But one thing that that’s very important to me is respecting time. This speaks a lot about a person and people who have worked with me would understand what I am speaking about. You have no respect for time, I have no respect for you.

What advice would you give to aspiring young Tibetan football players who hope to one day reach the level of success you have achieved in your career?

The only thing I would tell anyone is play less matches and work on improving your technical abilities. The basics is the key and I see it being ignored by our players at an alarming level.

What are your dreams for Tibetan football?

Tibetan football haven’t reached anywhere and I am being very honest and straightforward about it. We have nothing to show for in all these years in exile, we have one big tournament GCM, that in itself is losing its magnitude or significance.

Hmmm since Portugal and Brazil are out I would say Argentina. One Goat couldn’t but I hope the other one can and we all will have one happy ending. Players of that greatness deserve such ending.