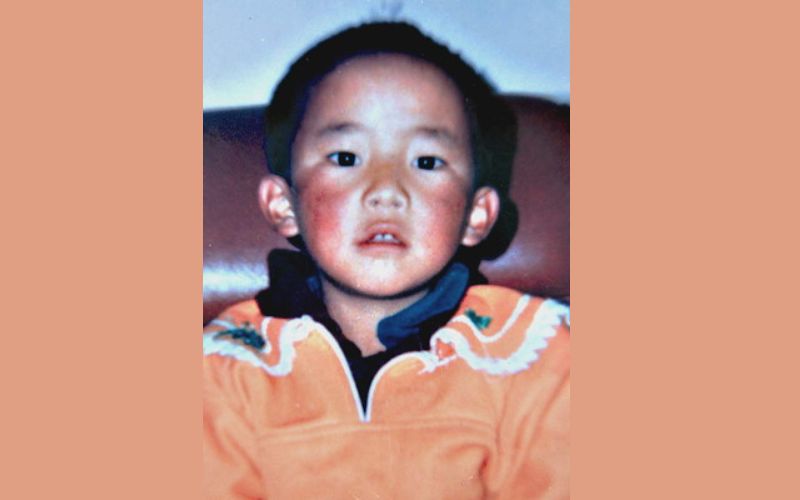 Humanity should not be a dead species! Panchen Lama: A Life in Prison

A Life In Prison 17 May 1995. It was like any other day for him. He was happy. He was content. After all, for the whole afternoon, he had been running around the grasslands and playing with the animals. Tired and exhausted, he returned back to his home to eat the Tsampa and Meat soup which his mother had cooked.

Although he had been recognized as the reincarnation of the tenth Panchen Lama- the second-highest religious figure of Tibet- he was still a small child and too young to know what it meant.

He just turned 6 years old and very soon, he would begin his monastic studies which he didn’t look forward to. The name of that child was Gendun Choekyi Nyima.

While he ate, he noticed his parents acting very strangely. They were moving around in fearful and rushed steps, occasionally whispering to each other. But as soon as they noticed the boy coming towards them, they hushed into silence and composed themselves. And they greeted their boy with a smile. “Ama(mother), Pala(father), What happened?” The boy asked. “Nothing, Nothing. Don’t worry. You go to sleep.” They replied.

Oh, but there was something to worry about and it terrified his parents. But they didn’t tell him. How could they? How could they tell their 6-year old child that his life might be in danger because of him being the Panchen lama?

That he might be taken away from his parents and that he might eternally disappear from the world for reasons he would not fully be able to grasp? Their worries were not without reason. After all, They knew that Chadrel Rinpoche, the head of the Panchen Lama search committee, had been captured for ‘treason’ by the CCP. But what kind of parents would they be to heartlessly say something like that? So they kept their worries to themselves and lied with smiles.

In normal times, it would be a lifetime of luck and joy for the Panchen Lama’s family but this was not a normal time. Tibet wasn’t normal. The roaring military of the Chinese Communist party made it extremely clear.

“Maybe this is also a part of our Karma…” The parents whispered in consolation. “...a trial from our past lives…We have to be strong! For him…” They broke down into silent tears. They made their way to sleep after a nightly prayer, a prayer for protection and help. They closed their eyes to shut out the light but they couldn’t seal their spirits from worrying. Would today be the day? They silently thought.

In the dead of night, the door came down. And hearts of hope turned to dust. The prayers had reached the wrong gods. And divine cruelty had descended. Chinese policemen barged in with their boots and guns without any care. One could see it in their trained viciousness that it was not their first time doing this, and it was not going to be their last.

“You are under arrest” shouted the captain in Chinese as he gestured his troops to capture the parents and the boy. ‘You are under arrest’. A string of mere words, some may say in derision. But they have not heard it themselves for it is as lethal a sentence as it can get. Almost like a serpentine parasite, this sentence invades you and suffocates you out of any hope you might have.

And as the noise ‘You are under arrest’slithered its way into the ears and minds of the Tibetan family, they understood that their life was doomed now: Their future, their freedom, and their human dignity, everything turned to ashes. They had heard it before, people being imprisoned and tortured for singing and writing about the wrong things and praising unworthy deities.

They knew that in front of the divine dictatorship of CCP, mortals were swatted out like flies. But now that spectre was upon their family. What could they do now?

The parents saw the troops tearing down the house in search of the boy. They moved and jumped on the police to stop them but they were countered with batons on their heads and kicks on their stomachs. “WHY? LET US GO! WHY DO YOU DO THIS?!!! ”

The parents shouted in their tears as they tried to protect their young boy. They threw themselves again and again, in severe pain, at the police, buying as much time as they could.

Chances were small, soul crushingly small, but maybe the boy could run away. Hope is a sweet poison but it is all one has in moments like this. The police spared no effort in battering the couple and brutalising them. Afterall, for them, violence was much cheaper than peace. Blood trickled down two heads, standing witness to the trained cruelty of the police’s attacks, and covered their twisted faces of horror and weakness. It painted a picture of desperation. But the police, the divine soldiers of CCP, had no appreciation for art.

“WHY ARE YOU DOING THIS?” “WHAT HAVE WE DONE?” cried out the husband and wife.

Oh, but they knew exactly what they had done. They had committed a grievous sin. A sin so grave that it cannot be forgiven. Their sin was being what they were: the parents of the young boy. The parents of the boy who was the Panchen Lama. And now the angels of death with their guns and batons were ready to take them away, to give them the punishment reserved for breaking the divine rules of the government.

I wonder how the ‘arrest’ looked through the eyes of that small child. To someone who could merely string together a few words, how did the police with their guns look?

The young boy had been recognized as a Panchen Lama - the 11th reincarnation. Some would say that he is a living emanation of Buddha filled with limitless compassion and profound knowledge. But when that boy was captured, was he a Buddha or was he just a mere boy? Maybe the exalted mind of Buddha was already with him and he saw what happened as a part of his journey. Maybe he understood everything and accepted all of it with compassion and equanimity. Maybe he saw the entire causal chain of events, and accepted it.

But I think otherwise. I can’t see the Buddha in the 6-year old kid who was cruelly taken away. I never can. I can only see the kid who must have been so traumatised by everything that happened. 3 How much did the boy know? How much does he know now? Did he know that he was never to be returned back to the world? Was he aware that he was to be the youngest political prisoner? We are talking about a kid who is at the same age as the kid bawling their eyes out for a dental appointment.

Everything that happened then, must have been enough to hurt him for life. He might still be crying out for help in a ‘prison’, still holding onto hope, even after 27 years. Did his time stop since that day because time can indeed stop! People forget that. Does he know that he is living his 33rd year? Did he receive anything for suffering 27 years in prison? Do the policemen have any heart in them to realise the cruelty of the crime they committed?

And this crime, this crime against humanity happened right in front of our eyes: the eyes of the free world. We know that they ‘disappeared’ on 17 May 1995. But where is our rage? Where is the anger and sadness that should plague every waking day of our life that a child was imprisoned for political reasons? Only the case of the Panchen Lama should be enough to stop our heart with pain and long for his freedom. But tens of thousands of other Tibetans, young and old, ‘disappear’ in their fight for a FREE TIBET. They are slaughtered, kidnapped, and imprisoned. But we, the people of the world, allow this to happen when it should be filling us with rage.

Is there anything that conscience can still do? Does good still prevail in the end? Do we not value Freedom and Justice? Do we not fight for equality and human rights? Or is that just an empty promise we made to ourselves?

We fought against the absolute horror of Fascist dictators. So where is that reserved anger for the Authoritarian country of China? Do we not hear the message that Tibetans are sending with their lives? Don’t we know that our brothers and sisters in Tibet are burning themselves shouting “FREE TIBET”? Do we not know what they are trying to say? They are saying that the pain and suffering of burning away is better than living a life of tyranny under China. And as I write, there have been more than 148 self-immolations. But where is our rage, I ask again? Where is our so-called ‘humanity’?

We shudder at the thought of Jews being gassed by Nazis but why don’t we do the same for the Tibetans in Tibet? Do we Tibetans not matter? Are our souls worth less? Do our cries and pleas mean nothing? Is money so important to us that we can allow Tibet to be ‘raped’ as long as we get to have our share as well? That we can overlook the horror of the Chinese regime and praise them, as long as they feed us like pigs? Are we worth so little that we can sell our freedom and our human dignity away? I ask you again, Are you worth so little?

Are we so stupid to see ourselves dying by a thousand cuts, a cut of freedom here and a cut of dignity there,

Are we so senile to not smell our soul rotting away; or have we forgotten that souls can also decay! “Some men are born posthumously”. That is true but it is also true that ‘some men die before they pass away.’ And those are the people who have forsaken justice and freedom for themselves, their desires and their power. Those are the people whose rotting souls could be smelt so pungently. No! We should not let our soul die before our body dies. We should not let humanity be a ‘dead’ species.

As long as our body can move and our mind can think, we should never sacrifice our ideals of freedom. We should use the daggers of our language and our actions, to stab away at the heart of tyranny whenever we can. Where our brothers and sisters are forsaken by the cruel and the heartless, we should use our words and actions to comfort them, And where the devils and the demons lurk with their sins, we should deploy our everything to burn them away. To speak and write of the suffering of millions of tortured individuals like the Panchen Lama. And to save them. For we all know that ‘Humanity should not be a ‘dead’ species’.

(I am Tenzin Jampa -a Tibetan student born and raised in India. Currently an undergraduate at MIT, Cambridge, USA majoring in Physics and Philosophy with
concentration in ‘Meaning’. Interested in Physics theoretical research, making philosophy more accessible, alluring, and applicable for people for all walks of life, writing stories and blogs, podcasting, and adventuring. You can find me at tenzindjampa.com. I hope you found something of value and enjoyment.)