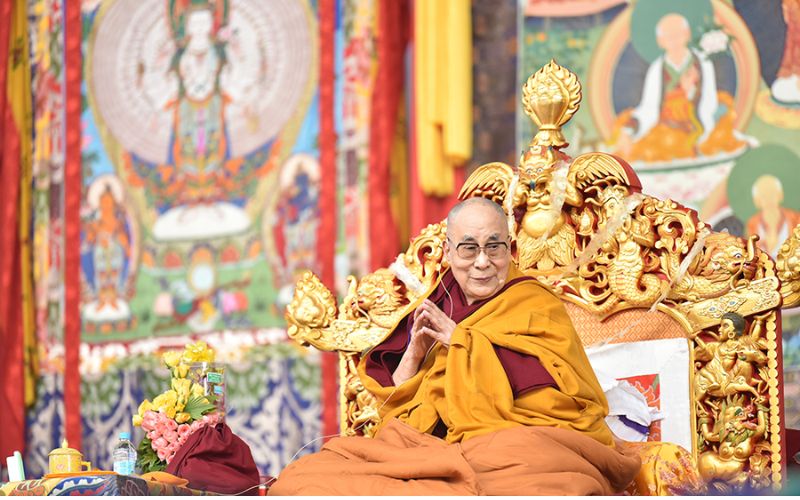 Of Buddha and the practice of Bodhichitta: Relevance of Dalai Lama’s teachings at Bodh Gaya

“Listen to and study the Buddha’s teachings. Reflect on them over and over again, then meditate on what you’ve understood. Be determined to work for the welfare of others. This is how you will reach the domain of the enlightened ones. If you have bodhichitta within, you’ll be at peace”, observed His Holiness the 14th Dalai Lama of Tibet as he addressed the gathering at the start of the first day of teaching on Nagarjuna's commentary on Bodhicitta at the Kalachakra Teaching Ground in Bodhgaya, Bihar, India. Dalai lama, the beacon of light and compassion, in his three days of teaching, shared his message of peace from the site where Buddha Shakyamuni had attained enlightenment two millennia ago.

According to the Dalai Lama, the practice of bodhichitta (enlightened mind) is the essence of all the Buddha’s teachings. “I generate bodhicitta every day, cultivating a concern for the welfare of others' ', said His Holiness on the First Day of teaching. This will lead us to understand the interdependent nature of self and others and to “hold others dearer than yourself”. This, according to the Dalai Lama, will give us true happiness. He emphasized on the importance of practice to “taste the real flavor of the teaching”; “The Buddha himself cultivated bodhichitta, engaged in the practices of a bodhisattva and became a fully awakened being. We should think, ‘Just as the Buddha has done before me, I will achieve this goal.’ The Buddha will not fail us”.

The Dalai Lama began the second day teaching by reciting Mani and Tara mantras to contain the upsurge of COVID19. The representatives of the project ‘Flame of Hope’ presented a lantern to His Holiness, the flame of which had been lit from the flame of peace in Hiroshima. The project with the slogan- One Earth—One Prayer—One Flame - wishes to change the world by “lighting the spark of hope for peace in children’s hearts”. His Holiness reiterated his call for a nuclear-free world- “I thought how good it would be if the world were free from nuclear weapons, which is something I have deeply prayed for”.

The Dalai Lama reflected on the importance of cultivating Bodhichitta and an understanding of emptiness while one is at Bodh Gaya, where Buddha and other great masters who have practiced in the past. One needs to cultivate them through calm abiding and analytical meditation in one’s day-to-day life; “Study, reflect and meditate on what you’ve understood. If you practice in this way, over days, months and years, you’ll see a change come about in your mind. This is what I wanted to tell you.” He touched upon the idea of ‘Emptiness’ as propounded by Indian Buddhist philosopher Nagarjuna as he resumed his reading of Nagarjuna’s ‘Commentary on the Awakening Mind’; “just as sweetness is the nature of molasses and heat is the nature of fire, the nature of all phenomena is emptiness”.  The Dalai Lama concluded the teaching by observing that it is by understanding dependent arising, the king of reasons, that we can eliminate ignorance, which gives rise to suffering.

“Tibetans, Mongolians, Chinese and people from the Himalayan regions have been practicing the Dharma for generations and consequently share a karmic connection”, observed His Holiness who also bestowed Tara Empowerment at Kalachakra ground on 31 December 2022, the third day of teaching. More than 80,000 devotees heard the discourse by the Dalai Lama. "If we look at Tibetan tradition also, Shakyas practice Bodhicitta in Nigama, Bodhicitta keeps the mind and body long and gives longevity. “This also gives good sleep”, he observed, driving home the importance of cultivating Bodhichitta. “Looking at the welfare of all, nothing can be better than this. Through the practice of Bodhicitta, the evils and sorrows within can be removed.”

In the post-pandemic world we live in, it is important that we cultivate the values of compassion and love for yourself and others. To this end, an enlightened mind helps us understand the meaning of our lives and transform the hardest of hearts and the most prejudiced and fearful minds. In a world torn apart by violence, conflicts and wars, the Dalai Lama’s message of the importance of seeking to cultivate an enlightened mind shines bright. For building sustainable peace and a happier humanity, it is vital that each one of us practice Bodhicitta and embrace the enlightened mind.

A Prayer for Long Life of His Holiness the Dalai Lama was also held on January 1st. His Holiness remarked that Buddhism that began as an Asian tradition now attracts interest from around the world. He also added, “I am determined to live for a long time and in my dreams, I’ve had indications that I will live to be more than 100”.

The Dalai Lama’s Bodh Gaya visit is significant due to numerous reasons.  The establishment of the Dalai Lama Centre for Tibetan and Indian Ancient Wisdom that will focus on "the Indian traditions that took root in Tibet in the 7th century, and were later practiced and propagated by the Dalai Lamas," is a manifestation of the key role that His Holiness has played in the protection and propagation of Indian wisdom and a statement of strong and long-running Indo-Tibet relations.  The Centre is the product in particular of the fourth life commitment of His Holiness: the promotion of the ancient Indian tradition of philosophy and "inner science" (adhyatma- vidya) and will be one of the most credible and respected learning centres of its kind open to everyone.

Bodh Gaya witnessed a coming together of devotees from different parts of the world. The Dalai Lama’s annual tour to Bodh Gaya had been suspended for the last two years due to the Covid pandemic and this year, over 8,000 foreigners from 39 countries registered for the sermon including groups of Buddhist monks from Sri Lanka, Thailand and Myanmar. This reflects the admiration that His Holiness the 14th Dalai Lama of Tibet enjoys among Buddhists of the world and the impact that Buddhism and Buddhist philosophy has created.

This should also serve as an occasion for the world to ensure that the Tibet issue is not forgotten; the Third Pole remains unlawfully occupied, where human rights violations are being perpetrated against Tibetans in their own homeland. The Chinese Communist Party is trying to interfere in the reincarnation of Dalai Lama, sending Tibetan children to colonial style boarding schools and closing down Tibetan schools and monasteries. The abundant natural resources of the region are being exploited and the threat of climate change looms large even as organizations like the United Nations fail to hold CCP accountable for its crimes against humanity.