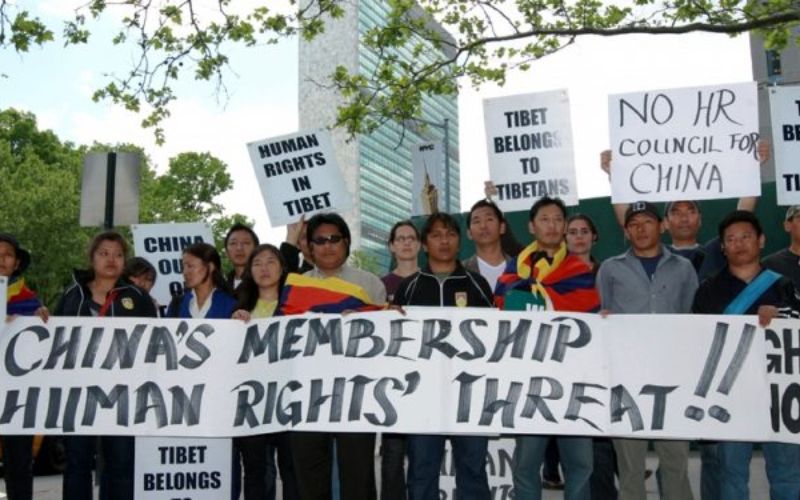 On the occasion of Human Rights Day, why should we discuss Tibet?

An 81-year-old Tibetan named Taphun set himself on fire on March 27, 2022; it was the last known case of a person on a long list of Tibetans who have self-immolated in Tibet. His last words, according to a report filed by rights group Save Tibet, calls for the return of His Holiness the Dalai Lama to Tibet - “On account of the blessings of the Gyalwa Rinpoche [the Dalai Lama], it is certain that the sun of happiness will shine in Tibet. The young children should not become discouraged.” There have been hundreds of such desperate acts, all unison in calling for the return of His Holiness the Dalai Lama and return of freedom.

No other country has seen such unprecedented numbers of self-immolation. China has blamed Tibetan self-immolation as an agent of foreign conspiracy, instigated by “Dalai clique” and “the Central Tibetan Administration”, working to overthrow the Chinese government. Various reasons, both from China, western academia and Tibetan experts have been propounded as the reason for such self-immolations. Beijing, in recent years, reasoned the deluge of these protests as a result of “socio-economic challenges” and "economic marginalization". Some western academia cited 2008 and subsequent protests as the result of economic marginalization, uneven development and illiteracy among the Tibetan to compete with the Han Chinese. There is clear indication that the occupied Tibetan region in China lacks in many social development indices- health, life expectancy, income, among others. While most, including western government and rights groups have alluded to these protests as a result of lack of human rights. Taphun, in last words calls for the return of the Dalai Lama, was hopeful of freedom as he said in his last word, “sun of happiness will shine in Tibet”. There is, however, more to this than those cited reasons.

The predicament of the Tibetan issues and these protests, in the eyes of many western government and academia is the oversight to understand the larger picture. Most of them have reduced these protests as a lack of human rights, overlooking repressive invasion and subsequent ethno-nationalistic conflict, involving territory and identity.

The United Nations has declared this year's Human Rights Day theme as: Dignity, Freedom and Justice for all. Tibet, for all its economic development over the recent years, doesn't enjoy any of the said three. Instead, the issue of Tibet, in the international platform, has taken a backseat, reduced to the question of human rights abuses.

Self-immolations first started in 2009; though it was not that there was no self-immolation before 2009. A Tibetan soldier in the Indian army named Thupten Ngodup set himself on fire in Delhi on 1998, Tapey, a young monk from Kirti monastery was the first one to set himself on fire at the market place in Ngaba. Ngaba is a small town in Amdo province, where his holiness the Dalai Lama was born and placed over the years has the harshest restriction imposed by China. Till now 160 Tibetans, mostly monks and nuns have self-immolated.

Images that manage to come out are shocking, heartbreaking and moving. An act so desperate, if it was documented outside China, it will take only few days bring down 'day' government'.

When China invaded Tibet in 1949, the common consensus among the communist cadre were that the Tibetans are barbarian, engulfed in serfdom, and China’s liberation army is invading Tibet to secularize and liberate Tibet from theocratic society. They have looked down on Tibet, from ages as someone from the lower realm. This has in recent years been translated into Han Chauvinism. ‘Dignity’, a sanctified UN theme, was not there from the beginning, and will not be there under communist rule.

China is the least free country according to a report filed by a US based Freedom House. Their political rights score in China is -2 out of 40. The Chinese Communist Party (CCP) tightens control over all aspects of life and governance, including the state bureaucracy, the media, online free speech, religious practice and tolerance, universities, businesses, and civil societies, and it has undermined an earlier series of modest rule-of-law reforms. People who continue to speak, bear huge personal costs. This is from the whole of China, but the Tibetan region suffers even greater repression and crackdown. 'Freedom' is non-existent.

The prominent Tibetan writer Go Sherab Gyatso was arrested in October 2020 in Chengdu, Sichuan; no further information about his whereabouts or the charges was released. There are countless cases like him, unreported and unknown outside Tibet.

Arbitrary arrest and incommunicado detention are common practices. US in their annual human rights report mentioned the situation as “grave” “no existence of judicial independence”. Justice in Tibet, to sum up, is a facade, existing only in name.

Under president Xi Jinping, human rights abuses have increased. Arbitrary detention, control over media, civil society, internet, media has increased tripled. Mass surveillance and China's social credit system made things worse. Tibetan in Tibet are living in an Orwellian state. The Xi regime has made matters worse. Tibetans are put from the frying pan into the fire.

In recent years, China's repressive and atrocities are meted out to children as young as 6-7 years old. Report released by Tibet Action Institute says, 806,218 Tibetan ages 6-18 are enrolled in boarding schools. Where Chinese government is forcing three out of four Tibetan children into state-run boarding schools, thus separating them from their parents and threatening and alienating them with their mother tongue, cultural identity and traditions. The world has been silent about these. These policies, once used by colonial countries in the 19th and early 20th are being replicated and used against young innocent kids.

One may ask why we need to talk about Tibet? There are also countries which have equal or worse human rights record than Tibet. Tibet can be used as the impetus to bring change in human rights and religious freedom across the world.

We are at a very critical period. There is a need for concerted and constant effort to talk about Tibet on most platforms. The struggles in Tibet are symbolic for every human rights struggle. Time is running out. Tibet cannot become another Balkan State.