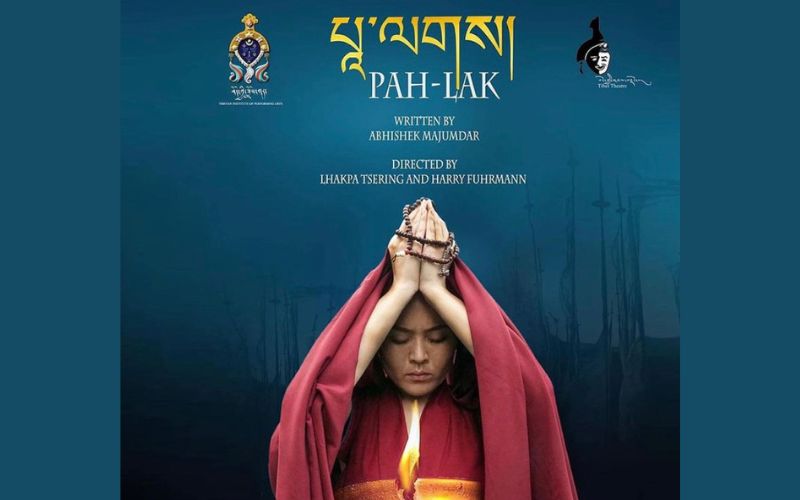 Pah-Lak, a play we Tibetans must entertain to remember who we are

It was pouring cats and dogs in New Delhi but people came in scores including our Indian sisters and brothers who made a fair chunk of the crowd regardless of whether the play was in Tibetan language. It was a bit disheartening to see the low turn-out of Tibetans, maybe they were taking part in political or other unseen activities in the eyes of many. But what can you say, one cannot push vision over others, one must come to their own self-realizations as that is when it hits the heart.

I have not personally seen or read the original English script of Pah-Lak written by Abhishek Majumdar as one had to be fortunate and privileged enough to get a seat at the Royal Court Theatre in London. But I have had the opportunity to read reviews from those who were able to witness it. The review on the Tibetan Review titled   “Pah-La – A Shallow and Confusing Examination of Tibetan Non-Violent Resistance” on 19 April, 2019 really caught my attention. This article brought attention on how lacking the theatrical play was, both in terms of accuracy and the compilation of cast members. The latter stressing on how there was not a single Tibetan cast member, with several characters even being portrayed by non-Asians and Tibetan views never taken into consideration.

Building upon those very deficiencies, Lhakpa Tsering and Harry Fuhrman with Abhishek Majumdar were now able to bring out the very play with a Tibetan cast and also translated it in Tibetan language.

Being in New Delhi, I was fortunate to witness this play on 8th October, 2022 at the Shri Ram Centre for Performing Arts along with my friends who had attended the Niguma Yoga Session (a yoga devised by Lady Niguma and shared to us by H.E. Kalu Rinpoche). I had a preset thinking of whether this play would more or less be similar to the ones we Tibetans used to perform in School and even wondered why was it even necessary to have such a play in the first place, if it fell along those lines.

Oh, how wrong was I, once entering the theatre and witnessing it first hand, I was taken aback and it made me accept my own lack of understanding theatre and the message it sends. It also made me think how Tibet and its conflict with China goes beyond geographical territory and comprises a deep level of intersectionality, which must be understood and taken into consideration when resolving the Tibet-China conflict and was an angle which this play tries to spotlight and engage upon constantly. And for the first time in an extended period, I felt goosebumps not because of the cold but of emotions.

The play enthralled the audience, especially the booming masculine voice of Deshar’s father whose image of a Tibetan who fights for Rangzen and complete independence was highlighted. Deshar is a nun and is a major protagonist of the play with her act of martyrdom invigorating the Tibetans. Another major character the Rinpoche, who is also the abbot of Deshar’s nunnery/monastery abides a very sarcastic tone and his interaction with the Chinese PLA commander was one of both intrigue and humor. During their engagement, the Chinese side were eventually able to coax a nun to accept bribe which eventually became the catalyst for the destruction of the monastery, thereby indicating how regardless of one’s belief and morals, when push comes to shove there are individuals who opts the easy way out even if it means betraying those they were meant to protect. The first part of the play concludes with the climactic scene where Deshar takes center-stage. The choosing of Deshar, a Tibetan female and a nun depicts the very worst of those marginalized and I laud the director in their selection here, though others might have their own opinion.

The play after the interval starts to bring an aspect of the Tibet-China conflict which is rarely talked about in large public gatherings and that is the sensibilities of the Chinese people and its armed forces (People’s Liberation Army and the People’s Armed Police) and how they are subjugated by the very establishment meant to protect and provide them security. This however does not mean they are given a free pass as they are the perpetrators and instigators of violence in Tibet. This narrative of going into the subalterns and moving away from the larger geopolitical tensions indicates how the political decisions from the higher echelons, impacts those under their governance. A very strong element of communal violence was generated and portrayed here with the conflict between the Tibetans and Chinese becoming personal. Being born and raised up in India, it made me think of the communal violence that occurs in India at varying periods. The binaries invoked in the play be it whether a. violence or non-violence, b. Rangzen (Complete Independence) or Genuine Autonomy c. masculinity or femineity and various others makes one truly think and reflect of the path ahead for us Tibetans in the resolution of the Tibet-China conflict.

Pah-Lak continues and illustrates how even in a sphere of gripping violence there are individuals who rise above it and Deshar symbolizing Tibetans to an extent is the epitome here. Through her sheer charisma and abiding of non-violent traits which she develops in her time in prison, she is able to influence the mindset of both her father and the Chinese staff serving the PLA commander both of whom till then were heading to extreme communal violence and confrontation. Yet the Commander proves a tough nut to crack and represents the hawkish Chinese Communist leadership who neglects the love and compassion of Tibetans, never giving them much credence. His action eventually culminates in him succumbing to his own mental downfall.

There are several of nuances in the play one can notice be it how the Chinese Commander with one staff alone confronts a big Buddhist institute, this never happens in Tibet as the Chinese would take numbers into considerations and confront them with a more powerful force. However, all these inaccuracies can and should be discussed another day.

I have tried my best in not spoiling the play and truly hope Tibetans would flock in numbers to witness this much needed play, discuss upon it and support more such plays in the future. I believe Pah-Lak and such manifestations of Tibetan art that narrate our story of Tibet will guide us Tibetans to move away from our daily dosage of truncated, unwarranted and even biased Tibetan commentaries on social media which seem to be at a plethora these days and remind us what it means to be a Tibetan now, then and always. Especially in these harrowing times when the Chinese President Xi Jinping whose leadership has brought Tibet (where a majority of our Tibetan sisters and brothers reside) down to its knees literally through his draconian polices secured an unprecedented 3rd term recently.

A Tibetan refugee born in India and currently is a Research Associate at the Foundations for Non-Violent Alternatives (FNVA), New Delhi. Studied at Hindu College, Delhi University and School of International Studies, Jawaharlal Nehru University, Recipient of the Sikyong Scholarship, 2015. Enjoys playing tennis and sports. Views and Opinions are personal.