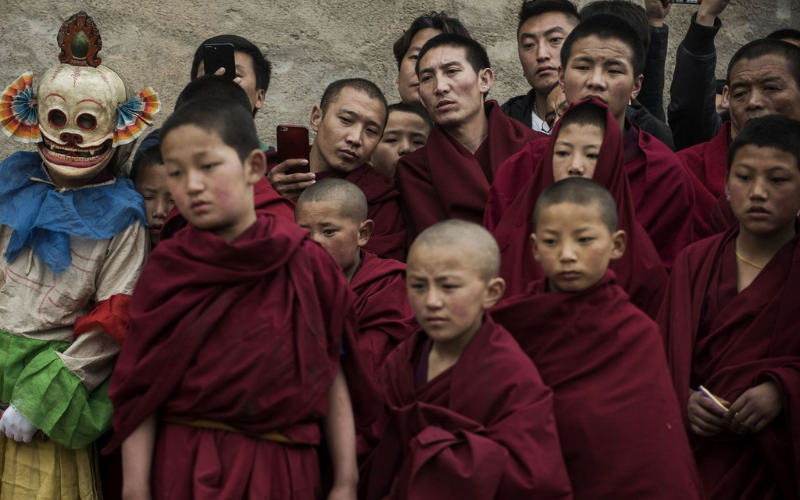 President Xi Jinping coming to power in China brought much optimism especially among many Tibetans and the larger Buddhist community in China because of the President’s strong affinity with this particular religion. Many Tibetans and even His Holiness the 14th Dalai Lama praised how president Xi Jinping was more realistic than his predecessors and stated how his administration is gradually embracing spiritualism when the Chinese leader visited India in 2014. This sparked many debates among the Tibetan community as to how there might finally be light at the end of our arduous struggle that we have been going through under the suppression of the Chinese Communist government.

Xi’s affinity to Buddhism is not a sudden tryst but has rather built up gradually through his upbringing - his father, Xi Zhongxun, was a strong advocate of Buddhism and other religious institutions when he headed the Chinese Communist Party’s (CCP) religious work. Under this environment, Xi grew close to the Buddhist community and it was further accelerated with his relationship with a Buddhist monk Shi Youming, who headed the Zhengding temples in Hebei province. This was the epitome of his closeness towards the Buddhist community whether he was a believer or not.

Dramatic Shift After Rise in Power

Yet, Lord Acton has stated that “absolute power corrupts absolutely”. Xi Jinping, since his rise to power, has adhered to this very statement and has undergone a complete 360° change with respect to not only Buddhism but the larger religious community in China. The ones that have been largely impacted by this complete change of persona have been the Tibetan Buddhists and the Uyghur Muslims. The rampant policies implemented in the Tibetan Plateau and Xinjiang - which by and large remain territories annexed by the current Chinese political party - brings to question what sort of governance is being implemented here. Is it socialism with Chinese characteristics or a genocide with holocaust attributes?

Buddhism in Tibet with Xi in Power

After Xi Jinping became the president of China, there has been a gradual shift in CCP’s view and policies over Buddhism in Tibet which, as of recent times, has been attacked through various channels by the government. This is not to say that the religion remained untouched during the initial period of his leadership. In fact, many of the policies implemented currently have had their foundations laid then. The root of all such tactics is the certification of reincarnated Tibetan Buddhist Lamas, thus undermining centuries of practice and tradition and thereby giving a strong indication of how the CCP under Xi Jinping will not appease the religious community but would rather adopt a hard-handed approach much like the Machiavellian approach of governance, where fear is used to gained obedience.

This was followed up by the intentional targeting of tangible Buddhist structures. The destruction of Larung Gar in Tibet - the world’s largest Buddhist monastic institution in 2016 - was just the beginning of what was to come and this move showcased to the world how under Xi it was not only the spiritual side of Buddhism that was being targeted but also the physical and tangible edicts of Buddhism in Tibet.

Such draconian measures led to many monks committing self-immolation in between 2013 and 2020 because of the dire situation they were placed in when it came to practicing the faith they believed in. One by one, several policies were implemented by Beijing under the directives of President Xi Jinping to demolish Buddhism in Tibet, thus ushering in an era similar to that of the Cultural Revolution that occurred during the 1960s.

Since last year (circa 2021) when President Xi Jinping consolidated his power and signaled an era of dictatorship in China, the project of demolishing Buddhism in Tibet has gained further impetus. Day in and day out we hear and witness incidents of how the CCP is not leaving any stone unturned in its ambition of ridding Buddhism out of Tibet eventually.

In late December 2021, a very prominent 99-foot Buddha statue was completely demolished along with the 45-huge prayer wheels surrounding it in Drakgo, Kham, situated in the Chinese demarcated Sichuan province of Tibet. This statue was just completed in 2015 after gaining all the required paperwork from the Chinese government and was constructed because the region and its people sought protection from the frequent earthquakes impacting it. However, regardless of the local Tibetans and the religious sentiment tied to it, the CCP and its officials demolished this structure with an attitude of indifference. And to many observers, it signaled towards the road ahead under president Xi’s confirmed dictatorship. The buck did not stop there as another three-story Maitreya Buddha statue was recently demolished by the CCP in this very region, thereby creating a nexus of demolishing Buddhist structures in Kham.

To further highlight the insensitivity of the ruling CCP under Xi, there has been a strong move in preventing the propagation of Tibetan Buddhism in Tibet and China. This is clearly seen through the recent announcement by the “Measures on the Administration of Internet Religious Information Services”, whereby it gave authorities directives and measures to clamp down on online religious activity. This measure was adopted after President Xi, in his speech at the National Conference on Work Related to Religious Affairs in Beijing last December, called for punishing Buddhist believers using social networks for religious activities and criticism of the government’s religious policy. This move impacted the online WeChat groups heavily in Tibet, where the presence of Buddhist groups had grown and had gained huge popularity with the advent of the pandemic.

Not stopping there, the most recent attack has been on the Tibetans in Amdo (Chinese demarcated Qinghai province) where Chinese officials have now warned and given notice to Tibetans to not keep any portraits of Tibetan religious teachers in exile. It is a known fact that the portrait of His Holiness the Dalai Lama is banned in China and China Occupied Tibet, but nowadays this has even extended to the other religious teachers including His Eminence the Karmapa, His Eminence the Sakya Trizen and many more prominent teachers and Buddhist masters in exile.

The Savior Xi has completely morphed into Satan Xi for the Tibetans with his actions speaking for themselves. Since Xi’s consolidation of power, the CCP has been ruthless and adopted a two-pronged approach of eradicating and Sinicizing Tibet’s religion. One, destroying Buddhist structures and two, eradicating the very means and agencies of Buddhist learning, be it online, which had gained much traction during the pandemic.

Tibet and Buddhism have remained ever synonymous since the early 7th century when Buddhism first gained prominence in Tibet, with both helping each other and developing a very unique culture, tradition and civilization along the way. Under Xi’s regime and his rampant policies, this age-old phenomenon is being threatened.

If the current trends continue, Buddhism in Tibet would truly be a tale of yesterday and a history, especially if President Xi Jinping secures an unprecedented 3rd term of leadership of CCP (the first since Mao Zedong) - a possibility highly predicted and seeming to be more likely than ever, inferring from the several changes in leadership and constitutional amendments carried out by President Xi’s government.