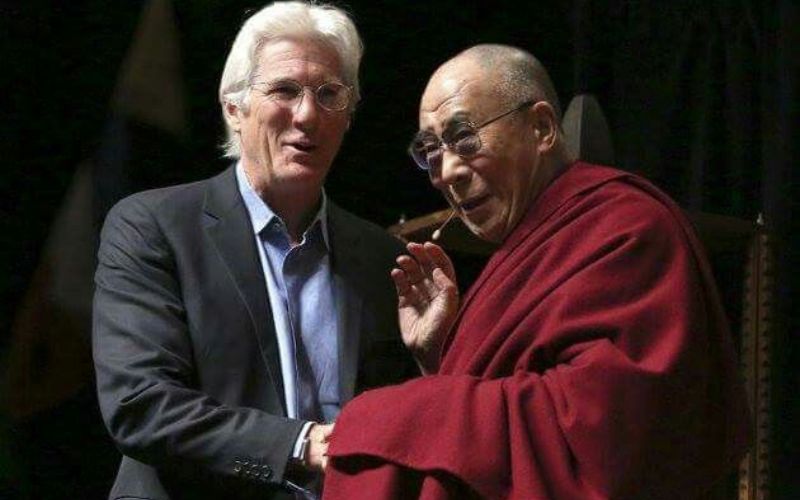 Richard Gere and his Message of Universal Responsibility

“None of his parents are Tibetans; yet he agitates all of China” - Richard Gere is my Hero (2010)

Tibet’s exiled leader and the world’s friend, philosopher and guide His Holiness the 14th Dalai Lama turned 87 last month. The special guest at the birthday celebrations at the seat of Tibetan government-in-exile in India was a person who has stood up against tyranny and has been spreading greater awareness about the cause of Tibetan freedom and the value of Buddhist practice, refusing to budge in the face of threats and bans- Richard Gere. What brought Hollywood’s beloved actor to the quaint, little town of Dharamshala? What is the sense of Universal Responsibility that Gere celebrates as his biggest takeaway from Tibetan culture?

Gere’s stint with Buddhism started in the late 1970s, when he traveled to Nepal and India where he met many Tibetan Buddhist monks. After meeting the Dalai Lama in India, he became a practicing Tibetan Buddhist of the Gelugpa school of Tibetan Buddhism and an active follower and supporter of His Holiness.

His Holiness the Dalai Lama’s idea of Universal Responsibility is that of a global responsibility that every human being should carry within. It is a sense of concern for the whole humankind and the world in which we inhabit. It negates the divisions of ‘us’ and ‘them’ and helps us view everyone as equal and with compassion. It comes with a realization that our interests are not independent from others’. This, according to the Dalai Lama, is at the center of religious harmony and a peaceful century ahead. It is the sense of Universal Responsibility that helps us appreciate the fact that all major religious traditions carry the same message of love, compassion and forgiveness.

Richard Gere believes that the “only way you can actively invalidate the dangerous idea of the self is to turn your energy around to serving (others)”. This can be achieved by understanding the deep sense of interconnectedness and responsibility for each other that saturates Tibetan Buddhism and culture.

"It's important to the world, important to the universe, what the Tibetans have been able to achieve in promoting this ideal of a Bodhisattva, and a sense of universal responsibility", remarked Gere in a recent interview. He believes that it is this idea of global accountability that is the biggest contribution of Tibetan culture to the world today and adds that humanity can benefit from such values derived from Tibetan culture. According to Gere, it is the most important value/ lesson the rest of the world can learn from His Holiness and Tibetan culture.

Tibet, also known as the world's Third Pole, was unlawfully annexed by the Chinese Communist Party decades ago while China claims to have ‘liberated’ it in 1959. His Holiness the Dalai Lama is currently living in exile in India. The Freedom House 2021 report tied Tibet with Syria as the least-free territories in the world.

The most defining moment in his activism for Tibet was the Academy Awards ceremony of 1993 when he chose to use the platform for talking about the human rights violations underway in Tibet. “With the knowledge of what a horrendous, horrendous human rights situation there is in China, [and Tibet] I wonder if we could all send love and truth and sanity to Deng Xiaoping right now in Beijing, if maybe he will take his troops, take them away from Tibet and allow these people to live as free, independent people again”, he said, going off script. China was not ready to, not surprisingly, take this lightly. The actor has been banned for life from China and from future Oscar broadcasts.

Ahead of the 2008 Beijing Olympics, Richard Gere called for a “Declaration of Truth” about China’s oppression of the Tibetan people. He reiterated his demand that there needed to be more transparency regarding the human rights situation in Tibet; “You can’t participate in the Olympics and not talk about what’s going on negatively in China”.

Gere was also the Co-Founder and Chairman of Tibet House US, dedicated to preserving Tibetan art, culture, and philosophy in 1987 and joined the Board of Directors at the International Campaign for Tibet in 1992. He has served as its Board Chairman since 1995.

The Gere Foundation by Richard Gere awards grants to groups dedicated to cultural preservation of Tibet and the Tibetan people, dedicated to providing HIV/AIDS care, research and treatment and to those organizations addressing human rights violations throughout the world. Gere Foundation provides grants to organizations that work for the Tibetan cause including International Campaign for Tibet, Students for Free Tibet and Tibetans Children’s Villages.

The Golden Globe Winner has faced rejections from the Hollywood industry and has been at the receiving end of hyper nationalistic Chinese cyber army’s ire because of his vocal stance on Tibet. The influence that China exercises in the media industry is well known; Hollywood has often tried not to offend China and any mention of the T-words – Tibet, Tiananmen and Taiwan- wont often make the final cut.

However, the actor has refused to let anything and anyone overpower his strong sense of Universal Responsibility and he continues to stand up for the world’s Third Pole and its inhabitants longing for their homeland and its exiled leader.