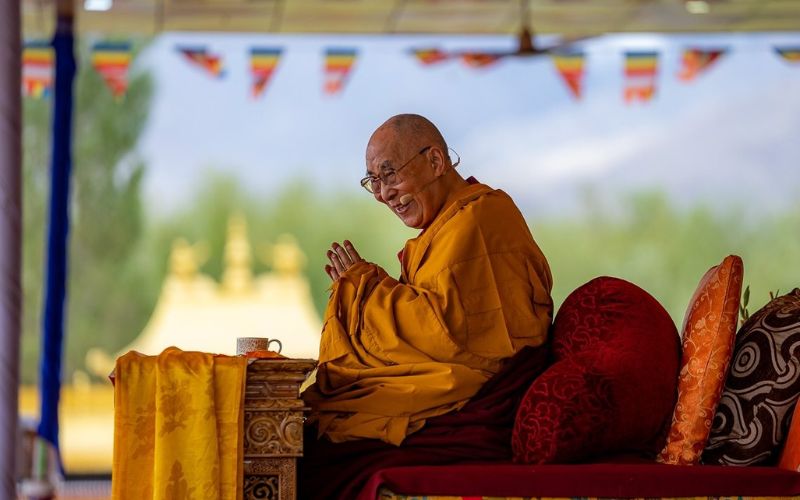 Significance of the Dalai Lama’s visit to Ladakh

His Holiness the Dalai Lama chose the remote Himalayan region of Ladakh for his first visit outside Dharamshala since the outbreak of COVID19 in 2019. This is not his first visit to Ladakh. Nor will it be his last. In his parting words, he said “we will see again”.

Ladakh has for long shared kinship with Tibet. The first king of Ladakh was a ruler of western Tibet, who some believe, is the direct descendent of the last king of Tibet. The relationship between Ladakh and Tibet has not always been cordial. They have fought wars; some directly, others under the patronage of Dogra king. But the peace between the regions has reigned longer than the anger and the animosity. And for centuries, Ladakhi sent tributes to Lhasa through the hands of caravan, for protection, businesses and peace at the western borders.

When the Dalai Lama institution or Gaden Phodrang came into power during the great fifth Dalai Lama, he increased his political and religious outreach, which before him were fragmented and confined only around Central Tibet. He started a military campaign against the Ladakhi kingdom in 1679, and annexed the Ngari region. He also expanded his religious campaign and propagated his sect. Ladakh has always sent novices to be educated in central Tibet. Religious education in central Tibet is unparalleled. The great three monasteries of Gelug order-Sera, Drepung and Gadhen have long produced some of the brightest scholars.

The present Dalai Lama’s religious outreach and social harmony has far more impact in Ladakh than the military campaign carried out by the fifth Dalai Lama. According to Tsering Shakya, the present Dalai Lama, during the late 1970’s, used to traverse the remote Himalayan region on foot and on horse, when roads were unmetalled and New Delhi did not understand the political strategy of developing border regions.

The Dalai Lama’s gelug order has a large presence in the Himalayan region. The former Gaden Tripa, head of Gelugpa order of Tibetan school, Rizong Rinpoche is Ladakhi and came from the royal family of Matho. The Dalai Lama’s own brother, Ngari Rinpoche has lots of monasteries under his patronage.

Bakula Rinpoche's relationship with the Dalai Lama is very close and they shared a long bondship during the most turbulent time of Tibet. He did everything to make His Holiness the Dalai Lama’s trip to India possible in 1956. When Kusho Bakula was working in New Delhi as junior minister, according to his autobiography, written by Sonam Wangchuk Shakspo, he would leave New Delhi on friday for Dharamshala and discuss important matters with the Dalai Lama and go back to Delhi on Sunday. Bakula also did make the Dalai Lama first visit to Ladakh possible. When he was serving as ambassador of Mongolia, he pushed hard walls and made the Dalai Lama visit to the former soviet state possible.

When the Dalai Lama visited Tawang in Arunachal Pradesh in 2017 for religious purposes, Chinese summoned India’s then-ambassador in Beijing, Vijay Gokhale, to file a formal protest, citing that India is trying to undermine bilateral relationship. This was surprising, because Arunachal is under direct jurisdiction of New Delhi and Beijing has no say whatsoever in the internal matters of India. They called Arunachal as southern Tibet, putting a heavy burden of proof of the sixth Dalai Lama being born in Tawang as one of the tall claims over the region.

Every visit Dalai Lama makes either to Ladakh or Arunachal pradesh, it never fails to irk China and relapse their old wounds. This time it carries such a significant subtle poke to China, which might not be his intention, but in the background, lies the Galwan valley clash in 2020. The 2020 Galwan valley clash brought the two emerging superpowers to the brink of war. Both sides, according to news reports, deployed more than fifty thousand soldiers at the Line of Actual control.

The core of Dalai lama’s popularity might lie in his institution and the weight it carried, but that alone won’t win both the hearts and minds of the people. His effort to harmonise different religions in the region, his constant message for the people to study buddhism, instead of partaking in rituals and rites have made a huge impact on the people. Recent 10km long human chain reception given to him is unprecedented. Not even a country's PM would be received with such reverence, come rain or storm.

Every year, whenever His Holiness the Dalai Lama visits Ladakh, he would always make time to visit various pilgrimage sites. Ladakh, home to different Tibetan schools of Buddhism have shown so much respect to the Dalai Lama, their devotion and faith in the Dalai Lama is unrivalled anywhere in India. This time, he made pilgrimages to the Jokhang, the principal Buddhist Temple in the centre of Leh, the Jama Masjid and Anjuman-e-Imamia mosques, as well as the Moravian Church in Leh.

For the Chinese he might be a controversial figure, “wolf in monks clothing”, “splittist”, but for ladakhi, he is a highly venerated figure. Even if he is not Ladakhi, shared cultural values and religions have bonded the territorial demarcation.

When he left for Ladakh via Jammu, he told the media present at his hotel “India and China, the two populated nations and neighbours - sooner or later you have to address this matter via negotiations and diplomatic means...use of military force is outdated.” Even as China carried out atrocious human rights abuses against its own people, pillaged wealth and resources, he still speaks pragmatically about what's best for both countries. It is this character, one who truly embodies genuine care even for one’s adversary that makes his beloved and revered person, even beyond the remote himalayan region of Ladakh.

In the words of Richard Gere, he is like a Cherry tree, giving shades and aesthetic value to all. Without discrimination, he belongs to all of us.