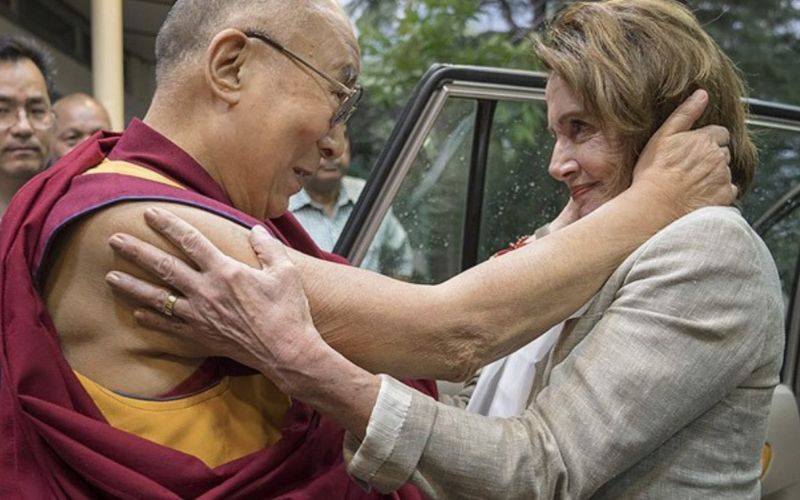 Sound and Fury: Analysing Chinese Response to Anything that has Tibet in it

United States House Speaker Nancy Pelosi is currently on an Asia tour. The mere rumours of Pelosi including Taiwan- a self-ruled island that China claims for itself - in her itinerary triggered an onslaught of reactions from China; threats to never "sit idly by" if she made the trip were heard and declarations of taking “resolute responses and strong countermeasures” to defend China’s “territorial integrity” were made. Military activities were ratcheted up around Taiwan, several fighter jets reportedly flew close to the median line that divides Taiwan Strait and China also announced live-fire exercises surrounding Taiwan. China even announced a series of bans on import of a list of Taiwan products.

This has a familiar ring to it; China has a history of deploying a harsh rhetoric of threat, blacklisting and bans against individuals who raise their voice for Tibet and Tibet’s leader His Holiness the Dalai Lama too.

Tibet, also known as the Third Pole and Asia’s Water Tower, was unlawfully annexed by China and His Holiness the 14th Dalai Lama, Tibet’s leader, was forced to flee and seek refuge in India. Today, Tibet is controlled by Chinese Communist Party and the land and its people are being subjected to human rights abuses. Sinicization of Tibetan language, religion, education and culture is underway in the plateau and Tibetans-in-exile, journalists or civil society are not allowed access to what could’ve been the world’s fifth largest country. China is uncomfortable with the world using the T-word (the other T-words are Tiananmen and Taiwan) and anything remotely connected to it and any reference to it invites intimidations and a volley of bans and online threats.

The most recent instance is that of Sikyong Penpa Tsering’s visit to Washington and Canada. China issued a warning to Canada, stating that it must "immediately stop interfering in China's internal affairs over Xizang-related issues, while harming the stability in Xizang, and to stop supporting and serving as a platform for separatists to engage in their anti-China separatist activities, or China will be forced to respond accordingly."  It referred to the "Tibetan government-in-exile" as a separatist political organisation with the goal of achieving "Tibet independence".

Another instance is that of NBA star Enes Freedom. In a series of social media posts, Freedom attacked the Chinese regime and called out its human rights record in Tibet, East Turkestan and Mongolia. He drew the attention of the world to the case of self-immolations happening in China-occupied Tibet. “I stand with my Tibetan brothers and sisters, and I support their calls for Freedom”, tweeted Freedom in October 2021. Today, Freedom has been censored for his outspoken criticism of the league’s close business ties to Communist China; Freedom was traded by the Boston Celtics and waived by the Houston Rockets in February.

China was irked when His Holiness the 14th Dalai Lama who is currently in exile in India decided to visit the Tawang region of Arunachal Pradesh in April 2017. China warned that it will take “necessary measures” to defend its territorial sovereignty and interests after India “obstinately” allowed the Dalai Lama to visit the “disputed” parts of Arunachal Pradesh, causing “serious damage” to the bilateral ties. Chinese social media and state-affiliated media were filled with warnings of “retaliatory” measures for inviting Dalai Lama who has been “long been active in anti-China separatist activities” to a “sensitive” region.

Dalai Lama’s visit to European Parliament was another occasion that displeased China. Stern criticism was voiced against the Parliament for hosting His Holiness, threatening countermeasures in retaliation for "adhering to the wrong position”. China also called off a summit with the European Union which was bound to happen soon and postponed upcoming visits of MEPs [Members of the European Parliament] to the country.

Many celebrities have faced the wrath of Chinese Communist Party for participating in events with Dalai Lama and supporting the Tibetan cause. Recently actor Keanu Reeves was at the receiving end for participating in an event organised by Tibet House US. His movies including The Matrix series were removed from Chinese online streaming platforms. Zero results were found for online searches of ‘Keanu Reeves’; “Due to relevant laws, regulations and policies, some results are not shown”, search engines showed. He is just the latest in the long list of actors and celebrities who have been banned by CCP; The Hollywood star Brad Pitt was banned from entering China for starring in Seven Years in Tibet (1997) and Richard Gere Richard Gere, who made an impromptu speech about the human rights abuses that China had inflicted on Tibet during the 1993 Academy Awards was banned too.

The act of Speaker Pelosi choosing to visit Taiwan by not giving in to Chinese intimidation tactics is a brave one. While the world is tuning in to Taipei, let us also talk about Tibet and the injustice being meted out to the Tibetans inside Tibet and the Tibetan refugees across the world who are longing to return to their homeland.