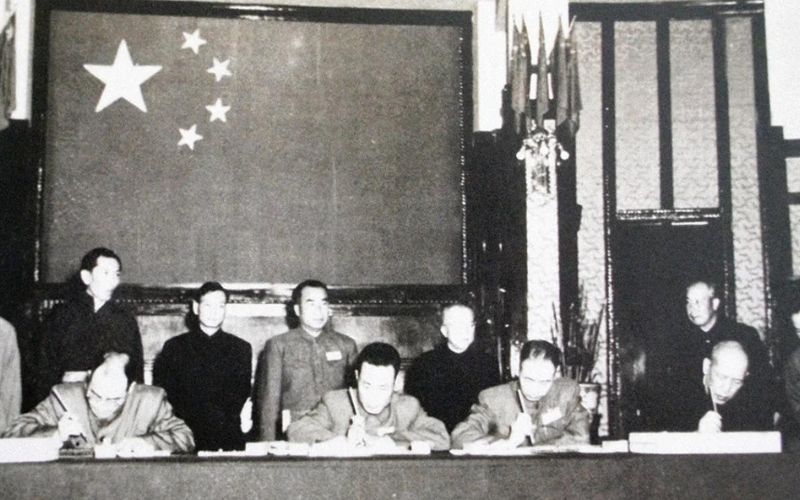 When the communist government came to power, they called upon reclaiming all the territories under the former Qing dynasty, ironically the dynasty regime was so despised by them, they became a forerunner of the revolution that took place in China along with the nationalist party then. When they ushered this call, they saw the territory of Tibet, a large land mass of unbridled and untouched resources as theirs even though this claim does not have any real authentication. Their only form of authentication came from the Amban (ambassador of China) having an office in Tibet. If this was the case, then would the British and other envoys that had such an institution in China have a claim of Chinese territory. The blatant and clear answer here would be a no.

The Chinese communist government though had an inhumane logic that spoke of how “their truth is true while others’ truth is false” has now been popularised in the international narrative as the wolf warrior diplomacy. Under this imperative, they sought Tibet to be theirs with the 17th point agreement for the Peaceful Liberation of Tibet bringing it to point. This narrative and the way of the Chinese diplomacy can be seen through the many polemics that were to be ushered by this very Chinese government in the years to follow. The ploy and diplomacy that centred around such a logic has engulfed Tibet and other minorities, but is now impacting the whole world seen by the recent issuing of statements and even to the pointed warnings towards Bangladesh and even the European Union which collectively wanted to hold trade talks for now.

After the call for liberating Tibet and having it back within Chinese territory, Mao Zedong sent the People’s Liberation Army (PLA) into Tibet. This push started from eastern Tibet that shared borders with western China. The PLA thought Tibet, without any real and modern military establishment and army, would succumb and crumble within days. The reality they faced was in stark contrast to their thoughts as the Tibetans in eastern Tibet - though not being trained in the art of warfare like the Chinese - had courage, bravery and geography to their advantage and provided to be a real block for the marching PLA. This militia which resonates a strong similarity from the mentions in Machiavelli’s major work “The Prince” where he states the need for a civic militia - truly saw its bloom here in Tibet.

Unfortunately, the modern warfare finally got a foothold in Tibet with the sheer number of the PLA troops entering Tibet, simultaneously marking the beginning of the invasion. The capturing of Chamdo by the PLA troops, which was the last recognised eastern fort in Tibet was damning. The big loss here gave indication to the central government of Tibet in Lhasa then that they could now not stop the Chinese troops from marching into Tibet and eventually in the capital Lhasa.

Amidst all these developments that occurred from 1949-1951, Tibetans from their part tried their best in gaining international support and had delegate members sent to various nations of the free world. Yet, none of them were able to come back with a viable solution that suited the humble needs of the Tibetan government. This prompted them to move forward towards a negotiation with the Communist Chinese government as the military threat of China was so great that even the 14th Dalai Lama had moved away from Lhasa (the capital) to Dromo to seek shelter and protection. The Tibetan government, though wary of the new Chinese regime, still held their neighbour in good regard in context of the priest-patron relationship (Dalai Lamas being the priest and the Chinese ruling bodies being the patrons and in the past this relationship helped both nations, with China benefiting from it and being left untouched by the Mongols).

Oh, how wrong were the Tibetans here, as they were totally bewitched by their Chinese counterpart! The new Chinese regime under the communist party was a whole different entity altogether as they not only ignored this priest-patron relationship (which they also later used for claiming Tibet being under them) but also brought forward many controversial points when it came to the negotiations. Some of them being how the Tibetan governments and the Tibetans were to assist the Chinese in setting up a military establishment under the Chinese command yet also simultaneously mentioning how the Tibetan government have full authority in jurisdiction over Tibet but this point directly contradicts each other points. With the most critical point here being how Tibet after driving the forces of imperialism away would return to the motherland, China. This point confirmed how the Chinese Communist party wanted Tibet to fold under its regime and officially aligning with its call of it being freed from imperialistic forces, also signalled to many that Tibet would be under the current Chinese government. The negotiation was to be summed up by the agreement on 17 points by both parties involved and this is when the Chinese authorities took matters in their own hands. The Tibetans delegates were clearly ruffled by the points brought by China and with the whole might of the PLA barring down towards the Tibetan officials not only were the Chinese able to push their narrative of Tibet being part of China but under total duress ultimately led the Tibetans delegation into forcefully signing the treaty.

This incident showed how Beijing not only pushed their agenda with the PLA stoically behind it but also showed, the friendly Tibetans how wolf warrior diplomacy is a central theme in their politics. It also ushered the current Chinese Communist regime with much vigour and made them understand, how to push their agenda through such means of diplomacy.

This agreement signed between the Chinese delegation and the Tibetan delegation on 23rd may, 1951 led to two things simultaneously with it being on the extreme ends of each other. First, it gave the Chinese regime and the PLA - which was the driving force in the occupation of Tibet - an official document to achieve their goal now. Second, it brought much furore in the Tibetan government as the then prime minster of Lukhangwa, Tsetan Rabgyal and many others were livid that the Tibetan delegates at the mercy of the Chinese were led to sign this  biased agreement thereby signalling that Tibet was a part of China. They knew that Tibet was never a part of China. They were further appalled by the show of total disrespect by Beijing when it came to these negotiations. However, like any other treaty, there are many things to note here and the first part was that any treaty signed needed to get ratified. Furthermore, if a treaty signed between two parties faces any problems, especially with any signing party not adhering to it, there can be the repudiation of the treaty.

The Tibetan government, after much deliberation, finally on October of that year ratified the treaty and wanted to show goodwill towards China with whom they still associated the priest-patron relationship with. They thought that by doing this the unhindered killing and torturing of Tibetans happening in eastern Tibet would stop. Unfortunately Beijing, instead of reciprocating towards the kindness and generosity showed by Tibetans, did the complete opposite. They simply used the treaty for their own benefit and mentioned it whenever it suited their needs. The Tibetans were in for a shock as many lost their homes and were displaced. Others were tortured for not adhering to what the Chinese wanted. This totally shattered the will of the Tibetan people and the government now saw what the real face of the Chinese regime was - a wolf disguised as a lady. The attributes and functioning of the wolf warrior diplomacy was seen in full throttle here.

The Tibetan government pushed by both the Chinese authorities (who sought major changes in the agreement) and requests by their own people repudiated this treaty on March 1959 at Lhudup Dzong, where a temporary Tibetan government was set up. This treaty got officially repudiated by the Dalai Lama in exile to the international media of the free world on 18th April, 1959, thereby bringing an end to the chapter of this harsh agreement.

There are many deliberations upon this treaty as some Tibetans view this treaty about how China treated Tibet as a separate entity and had to go at lengths to get it signed (even if it meant bringing a chunk of the PLA inside Tibet to threaten them). They argue how within this treaty, there are propositions of how China would give Tibet much greater autonomy with the local government governing coupled with no change in the administration, thereby aligning with the middle way approach adopted by the Dalai Lama in solving the Tibet issue since the late 1980s. On the other side, Tibetans see this as a treaty where the Chinese authorities showed their real face - cunning and deceitful. This can be brought out from the statement of Tenzin Tsundue who, during the 60th anniversary of this treaty in protest, stated how Tibetans pegged three reasons for criticizing it:

Nonetheless, after more than 60 years of occupation, what we as Tibetans can clearly imbue from this, was how it empowered China to adopt such tactics and gave birth to the now much talked about wolf-warrior diplomacy that Beijing practices. Secondly, it made Tibet fall under their occupation and made the Dalai Lama and his followers to become refugees. Thirdly, it showcases to the world how Beijing treated such agreements - the 1962 Indo-Sino war after the signing of the Panchsheel - is one of many examples where Beijing had its way even after having a gentlemen’s agreement between two parties. The recent handling of Honk Kong, which is totally against the spirit and the wordings of the handover treaty between Beijing and London, also stands testament to the realities of Beijing’s diplomacy.

All in all, one needs to learn from such an episode of how Beijing treats people under their occupation and those beyond their jurisdiction. I, as a Tibetan, am truly sorry to see that the world is facing such a juggernaut in the form of China whose adoption of such diplomatic approaches sowed its seeds after they pushed the Tibetan delegates to sign the Seventeen Point Agreement.

(A Tibetan Refugee in India privileged to receive education. Studied at Hindu College, Delhi University and School of International Studies, Jawaharlal Nehru University. Recipient of the Sikyong Scholarship in the year 2015. Enjoys playing tennis and cycling. Views are personal.)