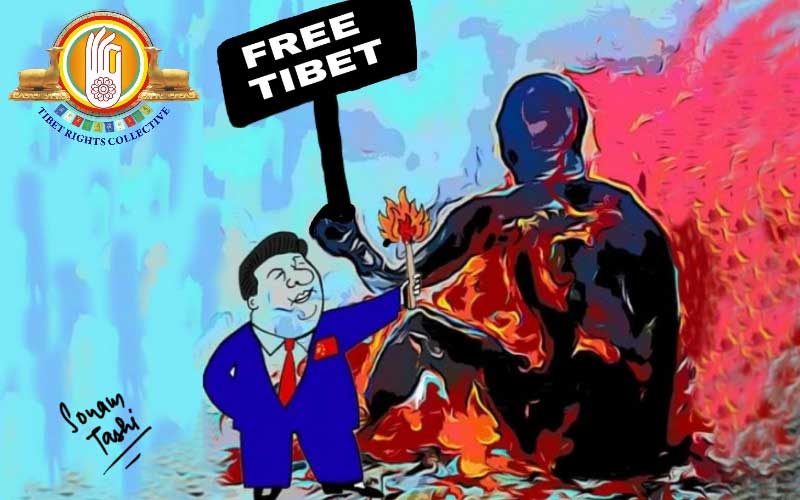 We humans are capable of great things, when we work together. However not all phenomenon leads to a morally good conclusion in humanity. One can just look and gauge from the current events occurring from the world ranging from the Ukraine crisis, conflicts in Africa, clash between the Asian oil rich giants and the ever-present injustice and violence against humans, which experts and scholars term it as human rights violations and abuses.

Tibet is a nation that was annexed by the Chinese Communist Party (CCP) through its military organ of the People’s Liberation Army (PLA). And even with 6 decades of occupation the people of Tibet continue to suffer constantly. In an act of protest against the vile and draconian policies implemented by Beijing, the Tibetans utilized various ingenious methods in preserving their culture through the digital space, connecting with the Tibetan diasporic community, setting up institutions solely catered to preserve the rich Tibetan tradition with support from the monastic bodies and charismatic Tibetan individuals.

When the pressure hits right at the human grey matter and the heart, the Tibetans who are generally known to be calm and peace loving in light of their innate adherence to Buddhism, even they unwillingly resort to sporadic violence, another tactic used in protest against the Beijing authorities. Unfortunately, even these attempts to bring sustainable change to Tibet and the Tibetans fell on deaf ears of the Chinese authorities. Hence, many Tibetans since the occupation have given themselves and their lives through Self-Immolation, which many call it as the ultimate form of protest and an act of non-violence against Beijing.

Self-Immolation (a form of Protest) and Tibet:

It is with great irony that the individuals who initially introduced and took upon this unwanted and self-inflicting form of protest was none other than a Chinese monk (first recorded). The monk going by the name of Fayu carried out the first recorded Self-immolation in China after calling upon the illegitimate Prince Yao Xu whose brother Yao Chang later founded the Non-Chinese Qiang (currently one among many self-demarcated Ethnic groups by Beijing).

In the modern era according to Oxford University Sociologist professor Micheal Briggs ‘the history of Self-immolation as a modern protest tactic begins on 11th June, 1963 in South Vietnam’. An elderly monk called Thich Quang Duc in Saigon (currently Ho Chi Minh City) on that day set himself in fire and burned to death while sitting in a lotus position. This was a direct protest against the South Vietnamese government that was Catholic and discriminated the Buddhist community.

In Tibet there is no formal established tradition of Self-immolation as mentioned by Tibetan Scholar Tsering Shakya. However there have been one or two cases of such act according to Tibetan historian Tashi Tsering who narrates two self-immolation acts in Tibet that occurred during the 11th and 17th century, with both having no reference as mean of protest. Hence, the ultimate form of protest, Self-immolation remained a foot note in Tibetan history until the CCP occupied Tibet.

Why Self-Immolation, Beijing’s response to it?

With this in context it becomes very much clear that Self-immolation, the pinnacle of non-violence (where one harms themselves to raise their unwarranted issue against their oppressor) was not something tied with the Tibetan way of life. But rather came out through necessity, in raising the dire situation and oppression subjected to the Tibetans from Beijing in their own land.

Beijing tends to point out how these acts are supported by terrorist entities and the so-called Dalai clique (Tibetans who follow the Dalai Lama). But the fact remains that since the blockage of information to and from Tibet since the early 1990’s, Tibetans in exile were prevented to directly contact their families and close ones. The late martyr and first Tibetan in exile to Self-Immolate, Pawo (martyr) Thupten Ngodup la set himself on fire in 1998 at New Delhi and passed away sadly. If the polemics from Beijing are true this event should have greatly caused much uproar and even led to a series of self-immolation in Tibet. However, this narrative was proved false and it was only 11 years later in Tibet that Tapgey a Tibetan from Ngaba region self-immolated on 27th February, 2009. This non-violent act was a direct protest to the protests, hard-handed approach and severe crackdown that followed throughout Tibet with the onset of the 2008 Beijing Sumer Olympics. Furthermore, after the Beijing summer Olympics more and more repressive policies were implemented in Tibet. These directly attacked the Tibetan language, culture, tradition and way of life. Likewise, these policies and its implementation was also a pilot project to Beijing who after testing these initiatives and pogroms in Tibet would eventually apply it to the Uighurs Muslims in Xinjiang.

The aftermath of this were two things that have gone hand by hand since.

The latter response from Beijing has been accelerated since last year when not only did the Chinese president visit Lhasa officially for the first time but was preceded by a White Paper on Tibet specifically. This White Paper report clearly showed the blue print of how Beijing is going to govern Tibet with president Xi at helm. And an interesting point mentioned here was how nearly 100% of Tibetans were smartphones users. This clearly shows how large the surveillance and Beijing’s Skynet (surveillance) has engulfed Tibet, with now every Tibetan being under the microscopic scrutiny of Beijing.

This aggregated form of information censorship has completely destroyed the citizenship media in Tibet, who even in such testing conditions voluntarily provides information and events occurring in Tibet to their brothers and sisters in exile clandestinely. Yet these censorships and maneuverings by Beijing have gradually brought back Tibet to the erstwhile era of Culture Revolution, where it remained and now remains hidden/incognito from the outside the world. Furthermore, those who partake in such activities both in Tibet and in exile are targeted, creating a censored and truncated freedom to Tibetans in exile as well. This effect is clearly seen from the recent self-immolation of Singer Tsewang Norbu, whose death still cannot be clearly verified even after more than 40 days since the incident. To further rub salt to the wounds of the Tibetan sentiment, when this question was posed to the Chinese ministry, instead of bringing clarity to it they stated that Tibetan singer Tsewang Norbu self-immolated because of mental issues.

Beijing continues to draw the ire on its human rights issue in Tibet and its other occupied region. With more than 3 known Self-Immolations occurring in Tibet already this year, it raises questions on the dire situation that people live under Beijing’s governance. To make matters even worse, access to information in Tibet is completely shut down and though some courageous Tibetans even lay their lives on the line in trying to share genuine information to rest of the world, it is a real cause of concern to the world because a region (Tibet) that has a landmass nearly matching the whole of Europe is being shut off from the world.

It is high time now that we come together as people, individuals and citizens of this world in concentrating our efforts in bringing the truth about Tibet and the activities of Beijing that now not only reaches their occupied borders but also beyond and has ramifications to the world as we know it.