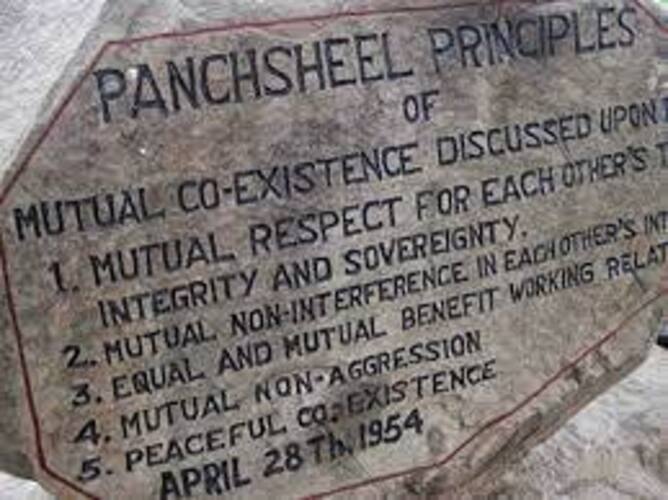 The Spirit of the Panchsheel Agreement & the Need for Its Revival

India was among the first countries to recognize the People’s Republic of China (PRC) as an authorized government. The tone of the relationship between the two sides has varied in modern times, particularly since the Communist Party of China came to power.  With the clash at Ladakh’s Galwan Valley on the India-China border in June 2020, a sense of mutual distrust has dawned on both countries. Tibet is a factor that we cannot overlook while examining tumultuous India-China relations, and when the focus is on Tibet, Panchsheel Agreement comes into the picture. China continues to flout the spirit of the agreement and reinforce its attempts to Sinicize Tibet, Tibetan culture, traditions, language and religion.

The Panchsheel Agreement was signed between India and China in April 1954.  Mutual respect for each other's territorial integrity and sovereignty, mutual non-aggression, mutual non-interference in each other's internal affairs, equality and mutual benefit and peaceful co-existence were the Five Principles of Peaceful Co-existence incorporated into the preamble of the 1954 India–China agreement on trade and cultural ties with Tibet. However, China started to dishonour the Treaty within a few months after the signing of the same in the form of revision of maps, territorial claim over Barahoti, intrusions in Damzan, Nilang and construction of a road to connect Sinkiang with Tibet.

In 1950, China invaded Tibet and in 1951, forced Tibet to sign the 17-Point “Agreement on Measures for the Peaceful Liberation of Tibet”. After nearly a decade of subjugation and repression by the Communist Party of China (CCP), protests broke out which culminated in His Holiness the Dalai Lama, the spiritual leader of the Tibetans, seeking shelter in India in 1959. In 1962, China launched an attack on India leaving the Agreement insignificant.

China prefers “armed coexistence” rather than “peaceful co-existence”; it has been increasing its military presence in the Tibetan plateau. China is constructing a vast network of dual-use infrastructure - roads, railroads, air routes, air bases, bullet trains and helipads - in Tibet. CCP claims that this is intended to ‘modernize’ Tibet. However, this provides China with a strategic advantage over India in the event of an imminent war by faster movement of troops and logistics.

Increasing instances of Chinese aggression along the India-Tibet border are indicative of the erosion of the Panchsheel spirit.  Since May 2020, China has kicked off military confrontations with India at the border multiple times. These have to be read along with Xi Jinping’s visit to Tibet’s Lhasa in June 2021 as a declaration of Chinese claims over Tibet. An aggressive social media/ propaganda warfare is also being fought by CCP along with its display of military prowess at the borders. An army of cyber-warriors is targeting social media accounts that talk about things China perceives as anti-China. Fake accounts on Twitter are spreading misinformation about Tibet while access to Tibet still remains restricted.

A report released by the US Department of Defence suggested that China has been constructing border villages located along Tibet’s borders with India in Arunachal Pradesh on the banks of River Tsari Chu. Similarly, ‘Xiaokang’ border defence villages have been built along borders with Nepal and Bhutan as well in accordance with China’s new Land Borders Law. China stakes claim over the Indian state of Arunachal Pradesh, which it calls Zangnan or South Tibet.  It recently announced "standardized" official names for six places in Arunachal Pradesh, days after it raised protests over the Dalai Lama's visit to the state. According to reports, China has also made it mandatory for Tibetan families to send one member to PLA who will be deployed along the LAC with India. These steps are violations of the spirit of mutual respect for territorial integrity and sovereignty.

Though mutual non-interference in the internal matters of the countries is embedded in the Panchsheel Treaty, China has (mis)used this to not let others raise concerns about the human rights abuses it is committing in Tibet. China has been using the same tactic to drive away any international criticism of its human rights violations in Xinjiang, Hong Kong, Taiwan and South Mongolia. Chinese authorities are also exerting control in the selection process of the next Dalai Lama, considering it as China’s “internal matter”.   Since 2007, Chinese authorities have imposed regulations limiting the recognition of reincarnate lamas.

China’s recent actions have been violative of the vital principle of equality and mutual benefit. Take for instance the use of Tibet’s freshwater as a strategic weapon to exert control over neighboring countries including India. Tibet, which China forcefully annexed, is Asia’s water tower where major Asian rivers originate. China is relentlessly building upstream dams on the rivers; a large-scale hydropower project is being planned on the Brahmaputra River as well. Earlier in 2017, China had refused to share hydrological data with India. China’s action of resetting Tibetan nomads, meddling with traditional agriculture methods, rampant mining and construction activities have come under criticism. Tibetan plateau is crucial in modern-day climate change discourse and China’s actions are contributing to the warming of the world’s Third pole and melting of glaciers.

China has been trampling on all the five basic norms governing international relations and refusing to accept Tibetan demands for autonomy, fundamental rights and freedoms for its citizens. Tibet is being Sinicized by China; a 99-foot Buddha statue was destroyed by authorities in Drago recently and Mandarin is mandatorily taught in schools. This needs to be condemned and China has to remind itself of the values of Panchsheel and the promises it had made in 1954. Nations across the world should come together to hold China accountable for its human rights record; a diplomatic boycott of Beijing 2022 could be the first step.