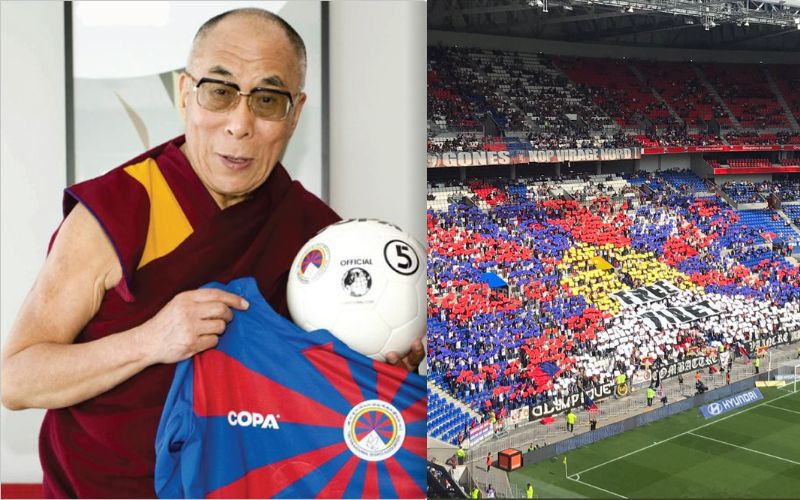 Tibetans and Football: An Affair to Remember

“In order to be a real country, you need a beer, an airline, and a football team.”: Frank Zappa

Every Friday, Tenzin Sonam (name changed) rushes to Chattarpur after work, where he plays a game of football and kicks away all the week’s worries and work pressure. After two hours of exciting games, they discuss the Premier League, indulge in fan fights and discuss transfers. Then there is a second place that they gather for yet another round of football – FIFA PlayStation gaming centres at Majnu Ka Tilla.  For Tenzin and his fellow Tibetans-in-exile who gather in the football turf during the weeekends, football is a celebration of their friendship, camaraderie and Tibetan-ness. As football excitement surges with the 2022 World Cup only a few days away, we look at the evolving relationship between the game and Tibetans.

The history of Tibetan love for football can be traced back to the beginning of 20th century. It was the British who introduced football in Tibet. The British built a military training facility in Lhasa in 1913. The Cultural Revolution (when the Kham stadium was destroyed) and invasion of Tibet by China brought a devastating effect on the game.  The Rooftop of the world was unlawfully invaded by China, and in 1959, Dalai Lama, along with many Tibetans sought refuge in India. The Tibetans who fled their homeland brought with them their love for the sport and across these years, it has flourished well through generations in exile.

It was the Danish journalist Michael Nybrandt who helped in the formation of the Tibet national football team composed of Tibetans in exile.  Moved by the Tibetan love for the game and the land’s history of annexation by China, he saw in the creation of a Tibetan national team an opportunity to spread more awareness about the country’s past and present. The “Forbidden Team” played its first ever international game, against the Greenland national football team which was held at Copenhagen on 30th June, 2001 in front of around 5000 spectators, creating history. The Tibetans in exile cheered for their team with their fellow Tibetans, away from their homeland. The formation of the Tibetan National Sports Association (TNSA) in 2002 which later played a huge role in developing, promoting and popularising the game of football within the Tibetan community and at the international level has been a game changer too.

The formation of a women’s team happened later in 2010 when Cassie Childers, an American who was living in Dharamshala then, realised the importance of having one. The snow-lionesses have played a key role in empowering Tibetan women, popularising the sport among women and inspiring a generation of young footballers.

In 2018, the Tibetan men’s football team played the first CONIFA Cup; the Confederation of Independent Football Associations (CONIFA) is the football federation for all associations outside FIFA. In collaboration with CONIFA, TNSA launched the first CONIFA Women’s Cup in July 2022 at Paonta Sahib in India, which also saw the participation of the Tibetan team. An exhibition titled ‘Pictorial biography of His Holiness the 14th Dalai Lama’ and ‘Tibet’s Journey into exile’ was also displayed alongside the event, thus letting the world get a glimpse of the real journey of Tibet from an independent nation to that of a struggling community driven away from their homeland.  "Win or lose, football is my platform to speak out on behalf of Tibet, as well as reconnecting with the country I fled as a child", Jamyang Chotso, Captain of FC Tibet was quoted as saying. This encapsulates the emotion of an entire generation of Tibetans in exile, who love football; who find in football a feeling of being one with their realm.

The Gyalyum Chenmo Memorial (GCM) Gold Cup now organised by TNSA, the most popular and coveted sporting event among the Tibetan exile community, is named after the great mother of His Holiness the 14th Dalai Lama, Gyalyum Chenmo Dicky Tsering. The inter-club club tournament started in 1981, where teams from Tibetan settlements in Nepal, India compete with each other, is a celebration of friendship, camaraderie and belonging. The 27th GCMGC was held in June 2022 with Paonta Cholsum Tibetan Settlement as the host.

Friendly football matches are organised in Tibetan settlements to celebrate His Holiness the 14th Dalai lama’s birthday, which draw huge crowds. For Tibetans-in-exile, football is a way in which they celebrate their nation – though an imagined nation, for most of them – and their dreams of a free homeland. The largest and oldest Tibetan Basketball Tournament organised by the Regional Tibetan Youth Congress Dhasa - the Martyrs’ Memorial Basketball Tournament - is also an attempt to create awareness among the younger generations about the Tibetan Martyrs who sacrificed their precious life for the cause of Tibet.

The Chinese Communist Party has a history of using sports as a tool to whitewash its human rights record. Beijing Winter Olympics 2022 was the most recent example. Condemning the games as ‘Genocide Games’, many countries had declared a diplomatic boycott of the same. The Beijing Olympics 2008 was also tainted with accusations of human rights violations in Tibet and Xinjiang. With total control over Tibet, now CCP is trying to use sports as a tool to project a highly distorted version of Tibet to the outside world-one of a happy, colourful Tibet. Chinese social media handles are filled with images of horse races and games being held in Tibet; some are held in connection to the 20th Party Congress which is to be held in the second part of this year.

The World Cup 2022 is fast approaching and Tibetans in India are gearing up to celebrate the festival of football too. Football is more than just a game for the Tibetan community; it has no boundaries, it dilutes differences, brings people together and is an excellent, universal means of communication. It helps them converse with the world about their stolen nation, identity and dreams.

Before the final whistle blows, they want their homeland back.