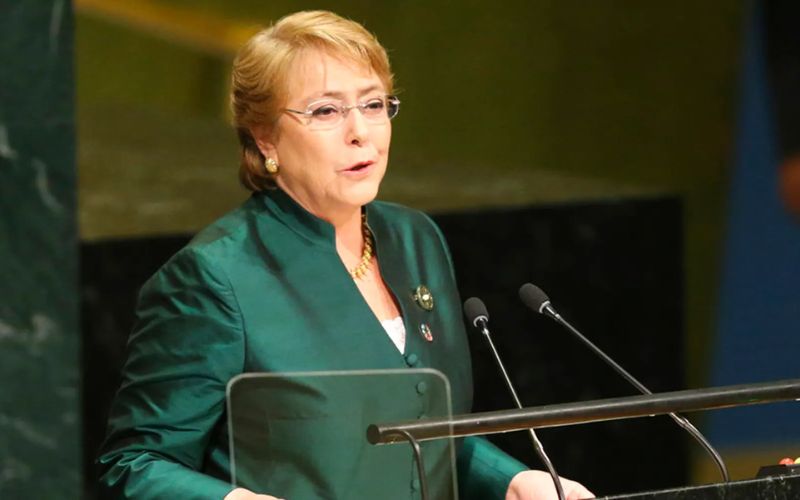 The visit of the United Nations Rights Chief Michelle Bachelet to China was a golden chance to probe the human rights situation in areas like Xinjiang and Tibet and to hold it accountable for its abuses against Uyghurs and Tibetans. However, the first visit of a UN Chief in 17 years to China, turned out to be a “wasted historic opportunity” which made the world question the role of the United Nations in this era and the extent of influence China holds in twisting opinions and moulding narratives. Here, we examine how the visit was covered by Chinese state affiliated media and the narrative that China created to counter what they call the “Western propaganda” about Xinjiang.

The statement by Michelle Bachelet at the end of her trip stressed that her trip was not an “investigation” and that this was “an opportunity to hold direct discussions – with China’s most senior leaders” on areas including “human rights”. This statement, The Global Times reported, “dismissed the rampant disinformation on Xinjiang” and “was a slap to the US and some Western countries”. The statement, it claimed, is a validation of their position that “there is no so-called genocide in China’s Xinjiang region and the allegations made by the West are based on various lies”.

CGTN stated that the visit provided “a chance to clarify the situation and dispel a lot of misinformation and other things that have been put out”. Asserting that China has “nothing to hide” in Xinjiang, CGTN stated that the visit was an opportunity to see “for themselves the unfolding story of economic growth, social inclusion and religious harmony in the region” so that “they may grasp the fallacy of the Western narrative”.

The central area around which the Chinese media chose to spin the narrative was how Xinjiang was a “hotbed for separatism, religious extremism and terrorism for several decades”and China’s actions in Xinjiang are nothing but “counter-terrorism and de-radicalization” efforts. People’s Daily Online reported how accusations of sterilization, forced labor, oppression of ethnic groups, and genocide are attempts to spread “disinformation about Xinjiang made by notorious anti-China scholars and separatists.” Xinhua Net went to the extent of claiming that China’s “law-based approach to fighting the three forces of terrorism, separatism and extremism” is justified in maintaining peace in Xinjiang. Reportedly, exhibitions on “Xinjiang's fight against terrorism and extremism” are held in Urumqi where “the cruelty and anti-human nature of violent terrorists are seen in the horrific pictures of victims” which are shown to delegates and visitors.

That the visit was “unsupervised” and “open” was another element that was highlighted by the Chinese media. Bachelet said at the press conference that they had conversations with people, including “senior officials from Xinjiang, local ethnic residents, academics, religious leaders, visited a prison to talk with inmates”, and went to “former vocational education and training centers and had exchanges with former trainees.”

Interestingly, the reports on Michelle Bachelet’s visits are filled with pictures that feature cheerful Uyghurs in colourful attires, “enjoying leisure times” and “chatting”; pictures that remind one of the stereotypical ‘happily dancing Uyghur’. The use and placement of such pictures are conscious attempts to portray them as reflections of the peaceful life the Uyghurs are purportedly leading in Xinjiang, contrary to all accusations of arbitrary arrests, surveillance and torture.

The Chinese media also chose to highlight the gun shooting tragedy that took place in a primary school in the US while Michelle Bachelet was on the visit to China, while they downplayed the release of ‘Xinjiang Police Files’ which also coincided with the visit. The Files constitute a major compilation of speeches, images and documents which provide a groundbreaking inside view of the nature and extent of mass internment of millions of Uyghur Muslims in Xinjiang region by Chinese authorities. The Global Times dismissed it as a “rumour” and as a “continuous campaign of smearing Xinjiang” in an “attempt to use Xinjiang to contain China.”

It is important to understand that a volley of tweets with similar tone and tenor from fake twitter accounts were also part of China’s propaganda toolkit while the visit was underway. The Chinese Communist Party is known for distorting online discourse and narratives about the human rights situation in Xinjiang, and also Tibet, which it has unlawfully occupied since 1959; social media accounts sing praises about and share rosy pictures of growing GDP numbers and infrastructure development in Tibet when in reality, gross human rights violations are happening in the rooftop of the world to an extent that Tibetans are forced to immolate themselves as a sign of protest when all other means of protest have been blocked.

Such Chinese misinformation campaigns need to be countered more vigorously. Spreading propaganda and fake narratives are China’s ways of legitimizing its hold over territories like Xinjiang and Tibet. China is taking the (mis)information warfare seriously and if a universal, global organization like the United Nations could not escape this propaganda machine that churns out mindless rhetoric, we can no longer ignore the alarm bells.

This op-ed originally appeared in The Global Order on June 27, 2022.