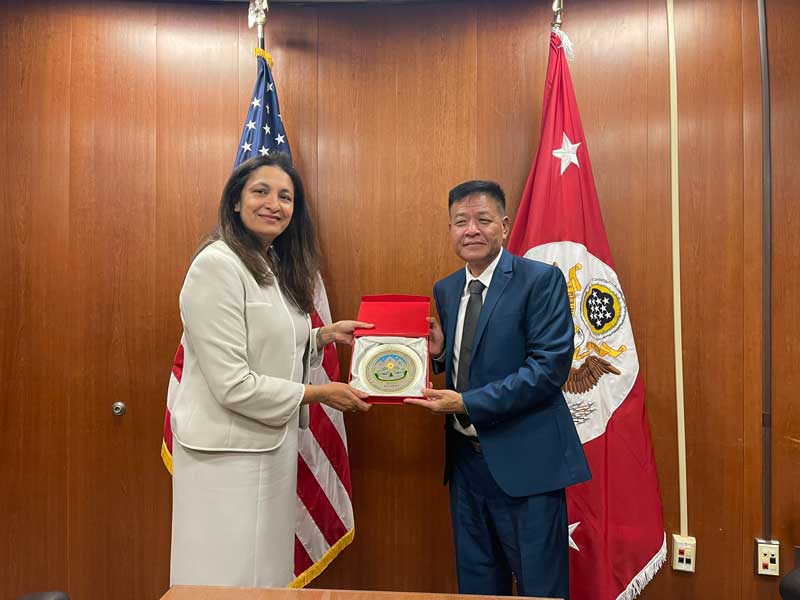 What Does Sikyong Penpa Tsering’s Washington Tour Entail for the Tibetan Movement?

Central Tibetan Administration’s Sikyong, Penpa Tsering, is currently on a 5-day tour to the United States which is set to conclude on April 29, 2022. Reports have suggested that his visit aims to rally US and international support to the Tibetan cause while pushing China to engage in dialogue over granting of autonomy to Tibet as per His Holiness the Dalai Lama’s Middle Way Approach.

With China continuing to tighten its grasp over Tibet through its Sinicization policies, Sikyong’s visit to the US comes at a critical time. While the Sikyong has signalled the Chinese to restart the stalled talks on resolving the Tibetan issue, it begs the question – will China respond positively? Moreover, given the fact that the Sikyong is there to rally international support, the visit will also highlight the sort of support that the US is willing to give Tibet as Washington continues its global pushback against China. It will also have far-reaching ramifications for the kind of global support that Tibet gathers post the visit, since it will be instrumental in ratcheting up pressure against China on the Tibetan issue.

The Chinese Reaction: Analysing the Possibilities

Tibet can easily be recognised as the original repression story at the behest of the People’s Republic of China, since it illegally occupied the land back in 1959 that forced HH the Dalai Lama to seek refuge in India. While China continues to draw sharp criticism for its inhumane treatment of the Uyghurs in Xinjiang and its repressive policies against Hong Kong and Taiwan, the Tibetan issue is something that China has historically been very paranoid with.

Naturally, China reacted sharply to the appointment of Uzra Zeya by the US government as the Special Coordinator for Tibetan Issues in 2021. With the Sikyong having met Uzra Zeya yesterday on April 25, 2022 to mark the 33rd birthday of Gedhun Cheoksi Nyima, the 11th Panchen Lama as identified then by HH the Dalai Lama, the Chinese reaction cannot be expected to be pleasant.

The core reason for this can be linked back to the time when Gedhun Choeksi Nyima was abducted as a 6-year old along with his family shortly after his identification as the Panchen Lama. His whereabouts still remain unknown to this day. In this regard, the Chinese will certainly not view this with positivity that the Sikyong’s meeting with Uzra Zeya focused on the execution of enrolment bill ‘HR 1646’ by the US, which calls for a meeting of the Ambassador of the US to China with the long-missing Panchen Lama and conferring religious rights to confirm his recognition.

Additionally, the Chinese might also view this request as a way for the US to interfere in the reincarnation process of the Dalai Lama since the appointment of Gyaltsen Norbu as the ‘official Panchen Lama’ was done for similar reasons – to control the institution of the Panchen Lama. Since both the Dalai Lamas and Panchen Lamas have traditionally recognized and identified each other’s reincarnations, this request is certainly not going to go down well with the Chinese.

Considering these dynamics of the possible Chinese reaction, Sikyong’s signal to restarting a peaceful dialogue on the resolution of the Tibetan issue will most probably be met with a stronger pushback from China. It becomes evident from the fact that Beijing views the Dalai Lama as a ‘separatist’ and continues to exert stronger control over Tibet through Sinicization tactics. Moreover, the Dalai Lama’s Middle Way Approach, which the Sikyong also abides by while talking about a dialogue with the Chinese, is seen by the Chinese as something that “does not tally with China’s history, national reality, state Constitution, laws and basic systems.

Interestingly, it is extremely curious that none of the major state-affiliated publications of China – be it the Global Times, People’s Daily, Xinhua or the China Daily – has covered any sort of news about Sikyong Penpa Tsering’s visit to Washington. Does it mean that China is knowingly not covering the news to prevent any information about the same coming out in their domestic setup? It could also mean that China will only react after the visit is complete, allowing them to gather complete knowledge of the outcomes of the visit and then issue sharp reactions.

Whatever the case may be, it is only plausible to assume that reaction or no reaction, the Chinese will not see the visit as something conducive to their national interests. And this does not bode well for Tibetans, since they are the ones as the receiving end of China’s ire.

The US Support & Rallying International Support

Despite a grim possibility of the Chinese reaction, it is not to say that the Sikyong’s visit will be futile in any way. One has to assume that the CTA and the US must be well aware of such possibilities. In that regard, the visit has deeper nuances attached to it as well which basically cater to rallying the US and global support for the Tibetan cause.

In the matter of Tibet, the biggest issue that comes to fore is the Chinese Sinicization tactics that are resulting in gross human rights violations. From Chinese Boarding Schools housing 900,000 Tibetan children aged from 6 to 18 to eradication of Tibetan language, culture, traditions, religion and identity, the human rights record of Beijing on Tibet represents a dirty reality.

Such gross human rights violations, which are seen with great distaste by the US and its allies, are at the epicentre of Sikyong’s visit. In assuming that the Chinese reaction to the visit will be sharp, cobbling US and global support for Tibetans’ human rights and calling out China on the same is a pivotal task for Penpa Tsering as the CTA’s Sikyong. The visit, wherein the Sikyong will be meeting with a score of politicians, including the US Congress House Speaker Nancy Pelosi, who had extended the invitation to the Sikyong in the first place this time and remains one of the most vocal proponents of Tibetan human rights, will go a long way in highlighting the US support and the plight of the Tibetans. Additionally, US politicians like Rep. Chris Smith (R-N.J.), Rep. Scott Perry (R-Ohio) and of course, the US Secretary of State Antony Blinken remain steadfast supporters of the Tibetan cause. The Sikyong’s visit will surely play a pivotal role in rallying support from all such politicians and diplomats on the Tibetan issue.

Similarly, the Sikyong also stressed in the importance of Voluntary Tibet Action Groups (V-TAG) during his stopover in Frankfurt, Germany to highlight the Tibetan cause around the world. With the Offices of Tibet (OTTs) spread across various countries, Sikyong’s visit to Washington will certainly provide much-needed motivation and ammunition to these support groups in ramping up pressure against the Chinese government’s actions in Tibet.

Stitching up a global coalition that can ratchet up pressure on the Chinese to resume dialogue with the CTA is the only way forward to ensure that one day His Holiness the Dalai Lama returns to Lhasa, the Tibetans get to see the return of their beloved Panchen Lama, Gedhun Choeksi Nyima, and end China’s cultural genocide in Tibet. And the Sikyong’s visit to Washington is certainly a step in the right direction.