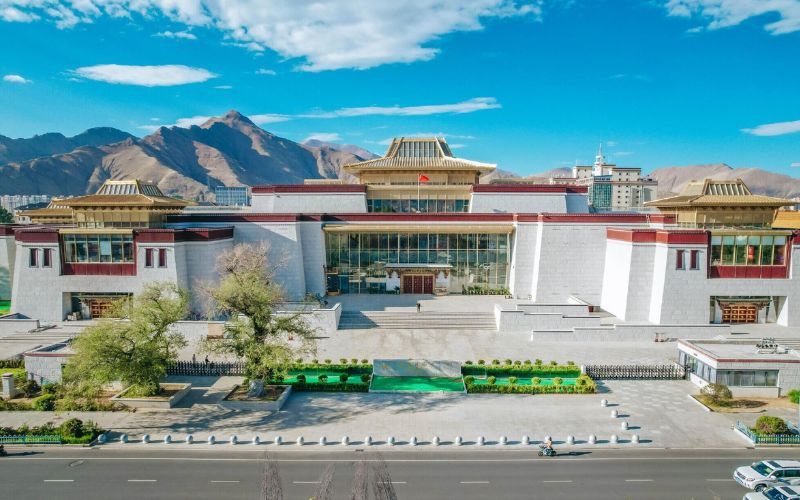 What’s behind China’s obsession with museums in Tibet?

Since last week, some Chinese state affiliated media handles and news reports  have been celebrating the reopening of  the renovated “Tibet Museum” in Lhasa City, after five years of expansion work and renovations. According to the report, with an investment of nearly 660 million yuan, the museum features over 2,700 cultural relics, including “600 items of their debut”. This is the latest in a list of museums the Chinese Communist Party has opened since it unlawfully occupied Tibet. What explains this museum boom in Tibet? Is it part of its attempt to rewrite/ misappropriate history and present China’s image of Tibet?

Apart from the renovated Tibet Museum, there is a Yak Museum which was inaugurated in 2014 in Lhasa’s Liuwu New District. Tibet Revolution exhibition hall located in the east in front of Potala Palace in Lhasa was completed in 1965 and it holds exhibitions, with focus on “achievements of the construction of a new socialist Tibet and serf indignation”. The list also includes the Tibetan Planet Astronomy Experience Center and the Natural Science Museum that seek to “build a sense of community of the Chinese nation” and an Intangible Cultural Heritage Museum (that copies the Potala outside and Jokhang temple inside!).

A virtual tour of the refurbished Tibet Museum takes one through the 36 meters high building with 1100 windows and exhibitions on Tibetan folk culture, customs of living, eating habits of Tibetans, costumes, textiles and residential areas.  The original Tibet Museum (with artifacts mostly taken from Potala Palace) was officially opened on 5th October 1999, to mark the 50th anniversary of ‘PRC’s Economic Reform in Tibet’. The museum’s exhibition narratives tried to highlight that the modernization of Tibet has accelerated after the 17-point Treaty was signed in 1951 between Tibet and China, and reinforce the historical legitimacy of handing Tibet over to China. It displayed collections of artifacts, including official documents and gifts exchanged between Chinese Han Dynasty officials and Tibetan leaders. The renovated museum goes further in misappropriating Tibet. It has nothing “Tibetan” about it; as a social media user pointed out, it looks like “a hybridized structure of traditional Tibetan architectural features with communist aesthetics which looks more like a scary 'alien' detention center”.

The Potala Palace, the erstwhile winter palace of His Holiness the 14th Dalai Lama has also been converted to a museum. With nearly 800 sensors placed around the palace, multiple monitoring tools and nine kilometers of fiber optic cables installed inside, the sacred space of Tibetans has been reduced to spectacle. Today, Potala Palace has been commodified as a tourist attraction; China state-sponsored media and Chinese bureaucrats use Potala as the poster child for Han Chinese tourism. This, along with the musealisation of the palace, are attempts to erase the past, and the religious and cultural significance of the Tibetan structure.

Exhibitions are also part of this Chinese project to whitewash its narrative of Tibet; for instance, an exhibition “that reflects Xizang's social progress achieved over seven decades and celebrate the cultural diversity on "the roof of the world" was held at the Cultural Palace of Nationalities in Beijing coinciding with 70th anniversary of the “peaceful liberation of Xizang”. More recently, reports suggest that an abstract art exhibition in Lhasa displayed “the communication and integration of Chinese and Tibetan culture after the Peaceful Liberation of Tibet”.

The museum drive is not restricted to Tibet; recently, China's famed Palace Museum began displaying artifacts in Hong Kong and the Xinjiang museum, in Urumqi, Xinjiang Autonomous Region was built with a focus on the “history and the folk customs in Xinjiang”.

Here, we analyze this interesting development along three angles. One, this must be understood as part of China’s larger scheme of becoming a “museum power”. According to The Economist, China is building museums at a frenetic pace; in 2000 it had fewer than 1,200 of them, and by the end of 2021, there were nearly five times as many. The aim is to influence the writing and perception of history that will act as aids to governing “volatile” territories like Tibet and Xinjiang. As per a DW report, the National Cultural Heritage Administration's work plan for 2016-2020 aimed to have one museum for every 250,000 people built by 2020.

The second question that needs to be asked here is one regarding access to Tibet. Even as China boasts of opening museums and observatories, it restricts access to Tibet. According to a recent US report, foreign diplomats, journalists, and tourists were “systematically” denied access to China’s Tibet autonomous region over the past year. United Nation’s Michelle Bachelet who was on a visit to China did not visit Tibet despite appeals from Tibetan activists and organizations. China maintains a tight information blockade in Tibet to such an extent that it is difficult to even access any information from the Rooftop of the World. For a government that keeps Tibet out of bounds for not just Tibetans in exile, but also for journalists and civil society, what good are these museums for? Who are these museums built for?

The third way to look at it is as a tool for Sinicizing Tibet. The museums and museumification of Tibetan culture and heritage aid in creating a narrative of Tibet as narrated by China; the agency here is not with the Tibetans themselves. As pointed out by Clare. A. Harris in The Museum on the Roof of the World: Art, Politics, and the Representation of Tibet, China has tried to convert Tibet itself into a museum, reclassify Tibetan objects as cultural relics and the Dalai Lama as obsolete. The authorities are trying to reduce Tibet, the sacred land, and its past into mere exhibits.

The Tibetans-in-exile have been putting up a brave fight against the misrepresentation of their past by China. The Tibet Museum at Dharamshala, India is a “museum made by and for Tibetans” with an aim to “challenge the representations of Tibet and Tibetan people that feature in museums in China” and elsewhere. The museum tells a “different story”;  Tibet in this museum “has a past, a present and a future”, unlike China’s museums which are packaged spectacles that tell stories of pain, anger and betrayal.