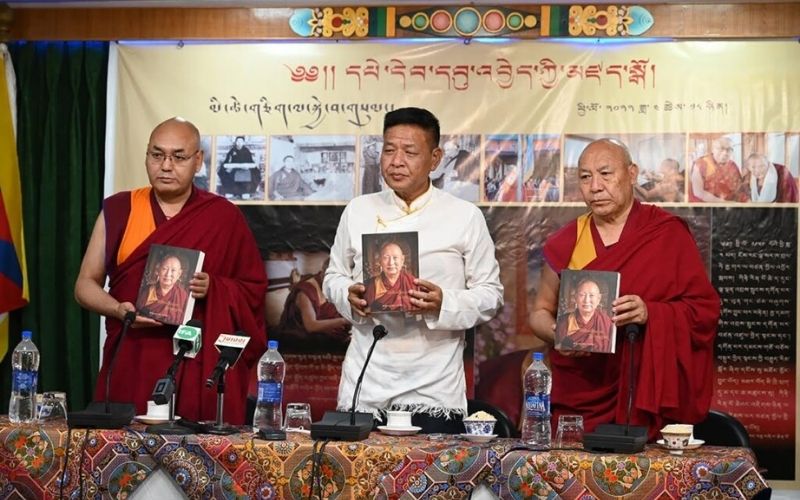 Dharamshala: Tibetan translation of the biography of Kirti Rinpoche by Jianglin Li titled ‘Three Lives in One Lifetime’ was launched at Library of Tibetan Works and Archives (LTWA) hall, on 18th April 2022.

Report suggested that the book launch was attended by Sikyong Penpa Tsering as the chief guest, accompanied by TPiE’s Speaker Khenpo Sonam Tenphel and Geshe Lhakdor, Director of LTWA as special guests. Deputy Speaker Dolma Tsering, Tibetan Parliamentarians, dignitaries, scholars and monks from Kirti monastery also attended the event where each attendee was presented with the newly inaugurated biography book.

Tibetan editor of the book, Redo Sangay introduced the memoir at the gathering, saying “the book was divided into three parts in which, first life was being born into a poor family in a village and becoming a high Lama. The second was joining the monastery in Lhasa as a novice and starting anew. The third was coming to India as a refugee, joining a school again to the point of joining government service.”

According to the reports, Sikyong Penpa Tsering in his address, lauded Jianglin Li and her husband for showing their enthusiastic attention through this publication on Tibet, after offering a ceremonial scarf and souvenir to Matthew Akester as a mark of appreciation for his contribution to translating the book into English.

Speaker Khenpo Sonam Tenphel and Geshe Lhakdor spoke to the gathering where the former expressed his gratitude to Rinpoche for his contributions to the preservation of Tibetan Buddhism and the provision of social and public services.