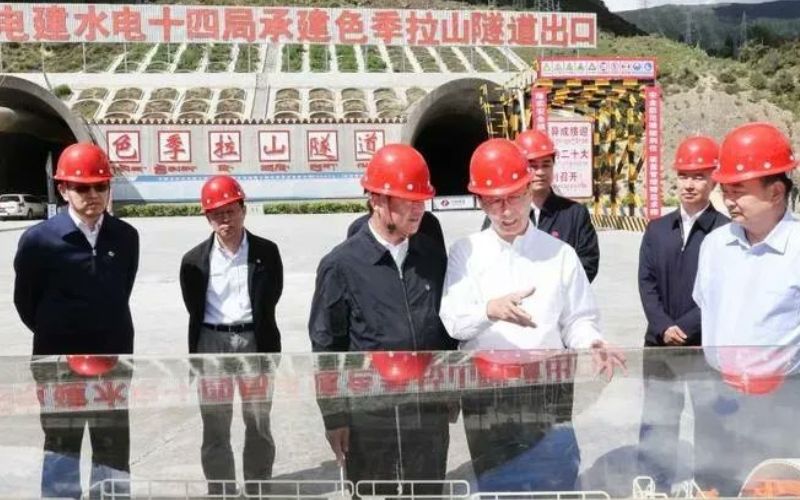 Lhasa: Chinese state-affiliated media reports suggest that Chinese Vice-Premier Han Zheng, also a member of the Standing Committee of the Political Bureau of the Communist Party of China Central Committee, visited a construction site of the Sichuan-Tibet Railway in Nyingchi on July 14, 2022.

Han, also a member of the Standing Committee of the Political Bureau of the Communist Party of China Central Committee, made visits to the city of Nyingchi in southwest China's Tibet autonomous region and Yushu Tibetan autonomous prefecture in northwest China's Qinghai province on Thursday and Friday. In Nyingchi, after visiting a construction site of the Sichuan-Tibet Railway and a sand-and-gravel processing plant, he reportedly stressed project quality and safety, and called for enhanced R&D and applications for domestically produced equipment, as well as greater production and use of energy-saving and green construction materials.

Visits by Chinese leaders to Tibet are to be understood as attempts by China to legitimise its claims over the land it had unlawfully invaded. Gyaltsen Norbu, the 11th Panchen Lama appointed by the Chinese government to replace the since long-disappeared Dalai Lama-recognized Gedhun Choekyi Nyima, had spent two days (Jun 16-17) at the Tibet Buddhism Academy, located in Chushur County of Tibet’s capital Lhasa. Interestingly, this visit comes a year after Xi Jinping’s surprise visit to Tibet, in his first such visit since taking over as the General Secretary of the Communist Party of China in 2012 to mark the 70th anniversary of what China calls “the peaceful liberation of Tibet”.

The visit comes ahead of the 20th National Congress of Chinese Communist Party which will be held in Beijing in the second half of 2022. Reports have suggested that Chinese authorities in Tibet have tightened the security and people’s movement in Tibet ahead of the anniversary.