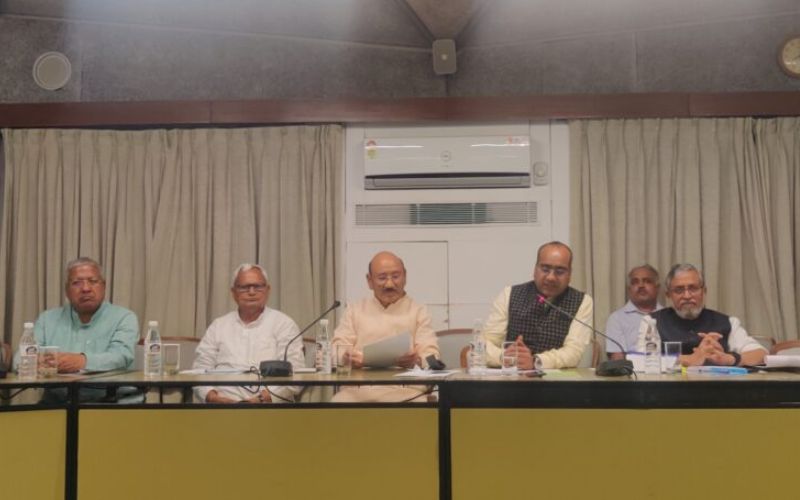 APIPFT holds meeting with members of Core Group for Tibetan Cause, India.

New Delhi: At the initiation of the apex coordinating body of Tibet Support Groups in India – Core Group for Tibetan Cause – India (CGTC-I), a meeting of the All Party Indian Parliamentary Forum for Tibet (APIPFT) with the members of Core Group for Tibetan Cause – India was held in the evening of 3rd August 2022 at India International Centre (IIC), New Delhi.

Shri R. K. Khrimey, National Convener, CGTC-I at the outset welcomed the hon’ble members of Parliament, CGTC-I members and other members at the meeting; and briefed them about the Core Group for Tibetan Cause – India, Tibet Support Groups in India, His Holiness the Dalai Lama, Tibetan Government-in-Exile (Central Tibetan Administration) and Tibetan Parliament-in-Exile.

MP Shri Sujeet Kumar, Convener, APIPFT chaired the meeting and introduced about All Party Indian Parliamentary Forum for Tibet, its background from inception to the current time, important personalities associated with the forum in the past such as M. C. Chagla, George Fernandes, Rabi Ray and Mohan Singh; and also, ardent Tibet supporters such as Nijilingappa and Atal Bihari Vajpayee associated with the Tibetan cause. He shared about his association with Tibet and Tibetans; coming from Odisha, it’s connection with the raising of the Special Frontier Force (SFF) with the contribution of late Biju Patnaik, former Chief Minister of Odisha. He also mentioned about his visit to Tibet in 2009 and witnessed the devotion Tibetan people had for His Holiness the Dalia Lama in Tibet, considering himself blessed to have an audience with His Holiness the Dalai Lama two times (Dharamshala and Odisha).

Shri Sujeet Kumar further highlighted the members of the Tibetan Rehabilitation Policy of 2014 and laid out points in regard to the welfare of Tibetan refugees and settlements in India, protection of Tibet’s environment and reincarnation of His Holiness the 14th Dalai Lama.