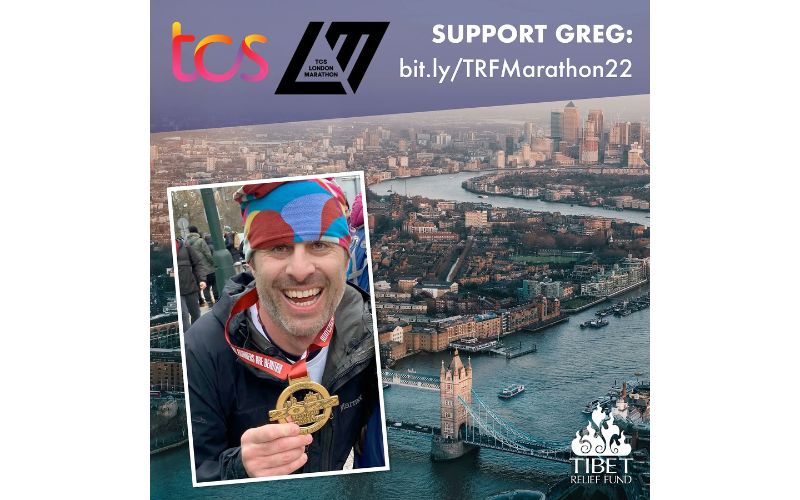 London: Author Greg C Bruno, who also serves on the board of UK-based Tibet Relief Fund, will run in the next London Marathon in October 2022 to support Tibet Relief Fund's incredible efforts on behalf of Tibetans all around the world.

Greg C. Bruno is an award-winning writer, editor, and digital storyteller who has worked for a number of US and international print and online publications, including The New York Times, the Council on Foreign Relations, and Project Syndicate. His journalism has appeared in The New York Times, Foreign Affairs, The Guardian, Forbes, UAE-based The National, CFR.org, and many others.

His book, Blessings from Beijing untangles the ribbons of power China ties to Tibetans beyond its borders and examines the political, social, and economic pressures that are threatening to destroy Tibet’s refugee communities. Reported over eight years and guided by nearly two decades of living in and working among Tibetan areas, Blessings from Beijing journeys to the front lines of this fight, into the high Himalayas of Nepal, where Chinese agents pay off Nepali villagers to inform on Tibetan asylum seekers; to the monasteries of southern India, where pro-China monks wish the Dalai Lama dead; inside Asia’s meditation caves, where lost souls ponder the fine line between love and war; and to the streets of New York City, where the next generation of refugees strategizes how to survive China’s relentless assault.

The London Marathon is an annual marathon held in London, United Kingdom. Founded by athletes Chris Brasher and John Disley in 1981, it is typically held in April but has moved to October for 2021 and 2022 due to the COVID-19 pandemic. The largely flat course is set around the River Thames, starting in Blackheath and finishing at The Mall.

If you're able and interested in supporting him in this 26.2 mile journey, his fundraising page is attached below.

Support him at h bit.ly/TRFMarathon22