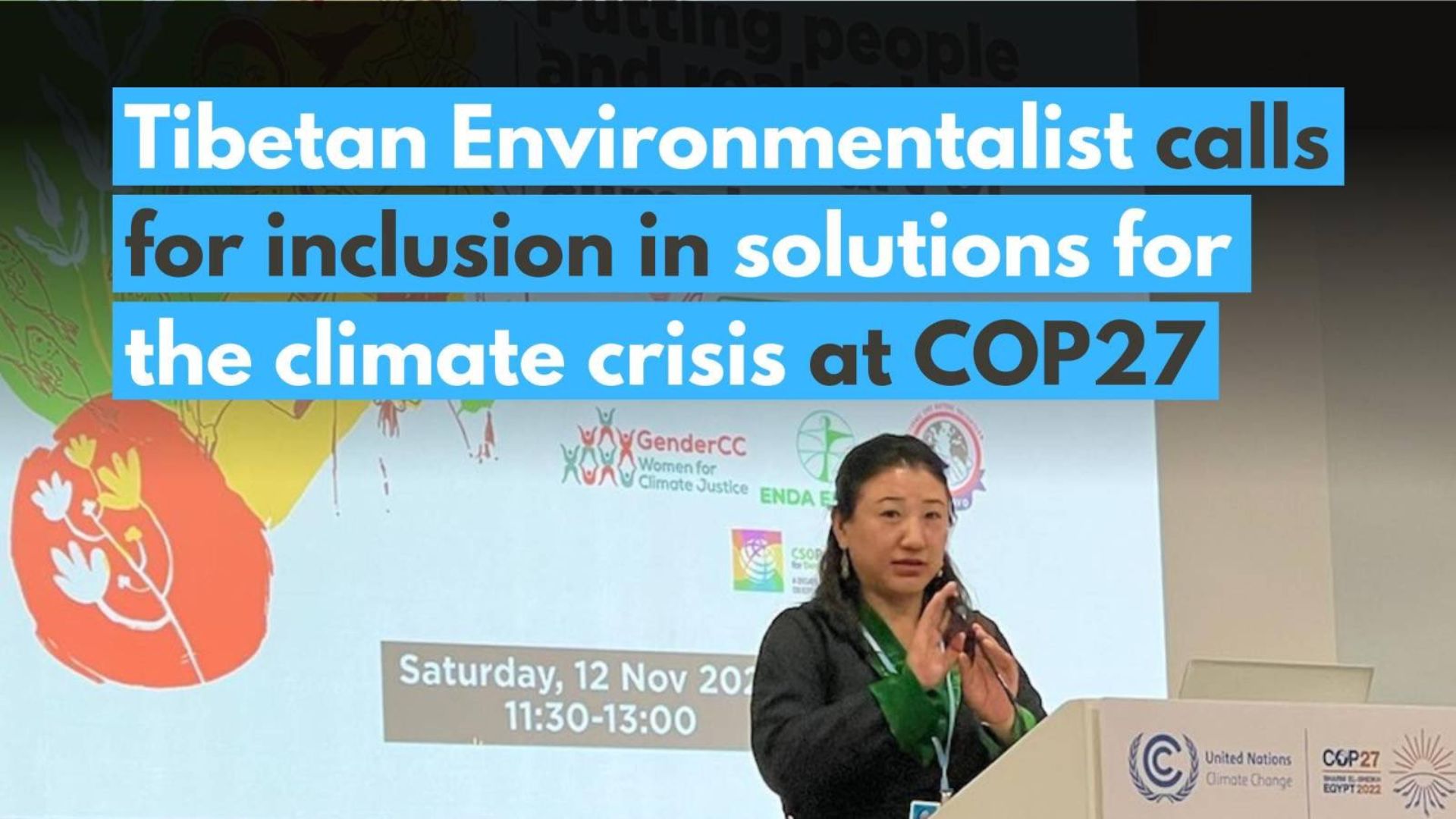 COP27: Tibetan environmentalist calls for inclusion in solutions for the climate crisis

Tibetan environmentalist Dr. Lobsang Yangtso, in a moving speech during COP27 'Putting people and real solutions at the heart of Climate Action' session, called for inclusion in solutions for the climate crisis happening in Tibetan plateau by CCP colonialism.

Lobsang said, “One fifth of the world's soil carbon is located in Tibet, which accounts for 2% of the planet's landmass. Therefore, the grasslands of Tibet are extremely important for combating greenhouse gases”.

She mentioned how there is no Tibetan present at COP27 to discuss these issues. Why are Tibetans not included in the global climate debate, asked Lobsang. Tibet is under Chinese occupation. “There has never been a single Tibetan from Tibet who has attended COP meetings” and graciously spoken up about the situation in Tibet. As a result, she said that there ought to be a room at the COP meeting for the stateless people who are still under occupation.

They should also have an equal say in deciding whether or not to sit down at a table and discuss climate change and the ways in which they can help with mitigation and adaptation efforts.

Tibet's grassland contributes to the global fight against greenhouse gases. However, the government has forced the removal of two million Tibetans from their grassland because it blamed the Tibetan Nomads for the degradation of the grassland and branded their way of life as extremely barbaric and uncivilized. Tibetan migrants have been living on their property for in excess of 8000 thousands years.

She insisted that Tibetans should play a crucial role in global climate discussions and policymaking. Adopting a right-based strategy that respects traditional knowledge and legally safeguards fine-line communities is critical.

Tibet has the third-largest ice mass after the North and South Poles, which is why it is referred to as the "third pole." All of Asia's major rivers originate in Tibet, which is also known as Asia's water tower. Ten of Tibet's downstream nations are served by these rivers. The water that comes from Tibet is essential to the existence of more than 1.4 billion Asian population. From Tibet, the major rivers of Asia—the Brahmaputra, the Mekong, the Salween, and the Indus—travel to the countries in the region.

Lobsang is of the opinion that because we are ultimately all interdependent, everyone ought to be brave enough to discuss these issues, and nations ought to bring them up. Each one of us is interconnected. We only have one blue planet, she recollected His Holiness the Dalai Lama’s saying. Therefore, it is crucial to increase accessibility and transparency in scientific research on the entire Tibetan glacier and its effects on downstream nations, as well as to collaborate with Tibetan experts on our research.

Lobsang concluded that the Tibetans inside Tibet, along with those in exile will continue to protect our environment and grassland, which not only benefits the Tibetans but also the entire Asian community. Tibetans should play a local role in global climate discussions and policymaking. Adopting a right-based strategy that respects traditional knowledge and legally safeguards fine-line communities is critical, she said.