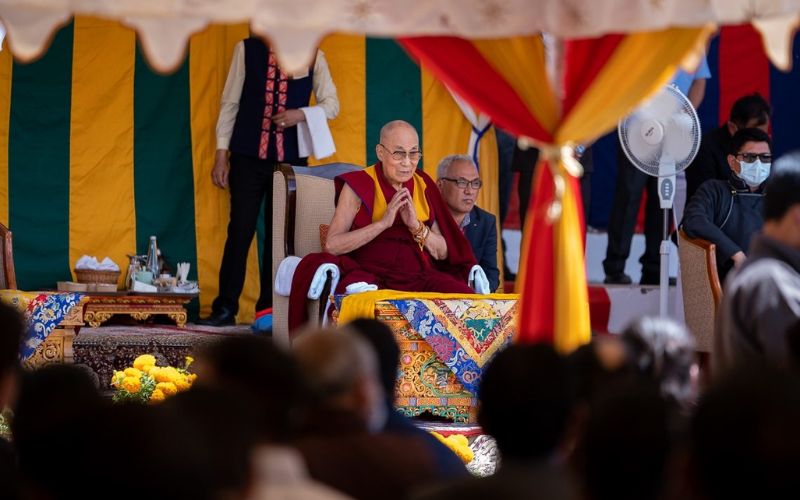 Remain strong and preserve your sense of brotherhood and sisterhood: Dalai Lama

Ladakh: The Tibetan Spiritual leader His Holiness the Dalai Lama's remarks hold immense significance amid China's attempts to impose its hegemony in Tibet through concepts like "Sinicization of Tibet" and "Fortress Tibet" and Xinjiang region. The Forbidden City had witnessed the 1959 uprising leading to the revered leader leaving Tibet and seeking refuge in India.

“Before I retired from political responsibility, we adopted the Middle Way Approach according to which we are seeking a mutually acceptable solution to the issue of Tibet. This means that we are seeking genuine autonomy rather than complete independence, primarily concerned with preserving our identity, language and rich Buddhist cultural heritage in all Tibetan speaking areas," he said.

“I am very glad that people of the Himalayan region, from Ladakh in the west to Arunachal Pradesh in the east, are also making a valuable contribution to protecting and preserving the Nalanda Tradition, rooted as it is in reason and logic. It is because of this logical, reasoned approach that many scientists today are able to take an interest in Buddhist psychology with its methods for training the mind and emotions. I’d like to commend you for your efforts," he added.

Dalai Lama had said that the people of the Himalayan region shared the same Buddhist cultural heritage with the Tibetans. “Because of their steadfast courage, Chinese communists are questioning their policy with regard to Tibetans. Among scholars and scientists, there is a great deal of interest in learning from our tradition, particularly with regard to what we understand about the mind and emotions, and the means to tackle destructive emotions,” he said. The Dalai Lama expressed hope that things will change for the better in China before long.

“Therefore, please remain strong and preserve your sense of brotherhood and sisterhood. Be cheerful and remain at ease,” he appealed to the Tibetans.

There have been reports of violent attacks against Tibetan Buddhists and alleged religious rights violations by the Jinping regime in its effort to turn China into a bigger player in the world. A report by Tibet Rights Collective said that China wants to strengthen its control over Tibet and its ‘misappropriation’ of Buddhism is an effort towards its end.