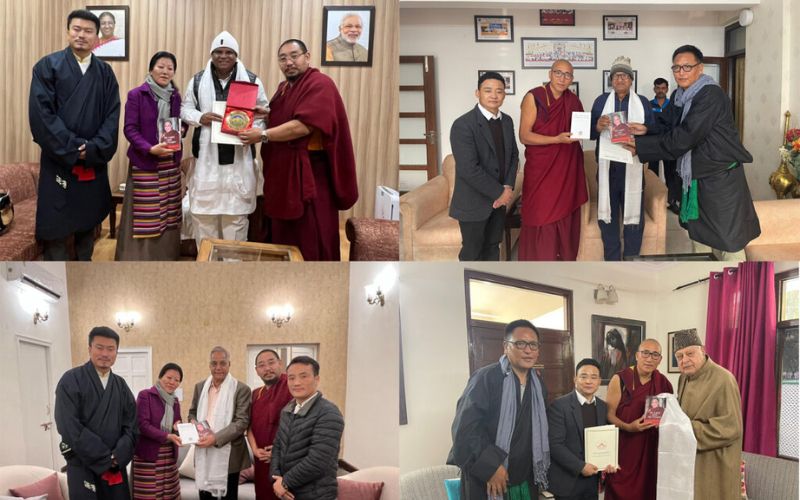 During meetings with Indian lawmakers and officials, Tibetan MPs expressed their gratitude to India and its people for all of their assistance to Tibet and Tibetans in exile. They also informed the Indian MPs about the 157 known self-immolations that have occurred in Tibet since 2009 in protest of repression, cultural genocide, and other human rights violations.

The delegates called on governments and Parliamentarians around the world to help create conditions conducive to achieving a just and durable solution to the Tibet-China conflict, and to bring an end to the illegal occupation of Tibet.

On the second day of its Tibet advocacy campaign, the ongoing Tibetan Parliamentary delegation's first group, accompanied by Choenyi Tsering, ITCO staff, met with six Members of Parliament from both houses of the Indian Parliament.

The Tibetan delegates urged the MPs to hold the PRC leadership accountable for upholding international law and treating Tibet as a matter of international concern rather than China's internal affairs, to treat the Tibetan issue with great urgency and graveness as China continues to threaten India's security with the border clashes that occur from time to time, to support an early resumption of dialogue with representatives of His Holiness and the Chinese Government, and to pay attention to the Tibetan issue.

Similarly, members of the first group met with Shri Sujeet Kumar, Convenor of the All-Part Indian Parliamentary Forum on Tibet and Rajya Sabha MP from Odisha (BJD), and presented him with the aforementioned Tibet-related documents and books. They informed the MP about the two organisations' ongoing Tibet advocacy campaign and urged him to continue supporting the cause of Tibet. They discussed the issues confronting Tibetans in exile, particularly Tibetan winter garment sellers, as well as other issues of mutual interest and future course of action. The members of the second group called on Shri Jayant Singh, Rajya Sabha MP from Uttar Pradesh and advocated Tibet’s issue.

During their meetings, Tibetan MPs gave Indian dignitaries the TPiE souvenir, an appeal letter, and books about His Holiness the Dalai Lama and Tibet. The Tibetan Parliament's Tibet advocacy programme will continue until December 28th.