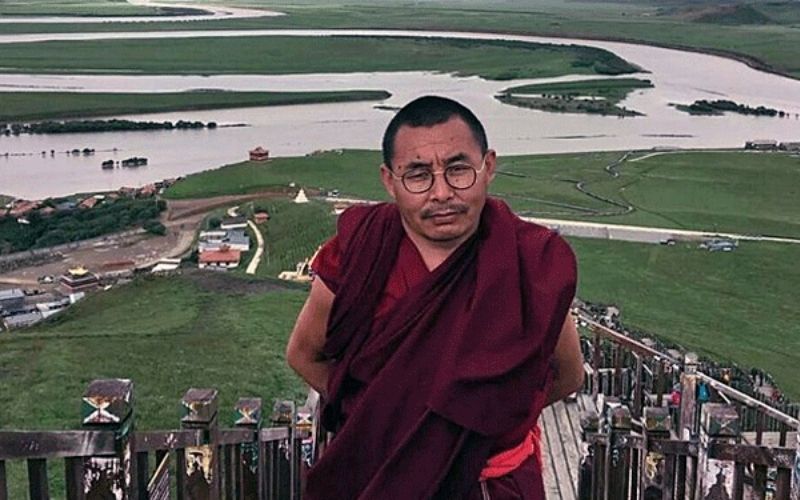 Dharamshala: The Tibetan writer and poet Gendun Lhundrub, who has been held incommunicado for more than a year after his arrest in 2020, is being detained in a prison in Siling (in Chinese, Xining), Tibetans with knowledge of his situation said.

Lhundrub, aged around 47 and formerly a monk at Rongwo monastery in Rebgong (Tongren) county in the Malho (Huangnan) Tibetan Autonomous Prefecture, had been monitored by authorities for signs of political dissent before being detained, a Tibetan living in exile told RFA in a previous report.

Authorities arrested Lhundrub on Dec. 2, 2020, in western China’s Qinghai province while he was on his way to attend a religious debate in Rebgong. He was put in the back of a black car driven by Chinese police, according to a witness.

“We have learned that Gendun Lhundrub whose whereabouts remained unknown until now is being detained at a detention center in Siling,” said a Tibetan who lives inside the Tibet Autonomous Region. “However, his family members are still not allowed to see him, and no information about his condition has been revealed.”

Lhundrub is reportedly undergoing political re-education program for which he must translate Tibetan Buddhist scripts into Mandarin Chinese, the source said. The Chinese Communist Party requires Tibetan Buddhist studies to be taught exclusively in Chinese.

Chinese officials told Lhundrub’s family in a September 2021 phone call that the writer’s trial would soon be held but have not heard anything since, said a second Tibetan who lives in exile.

Chinese authorities have frequently detained Tibetan writers and artists who promote Tibetan national identity and culture, with many sentenced to lengthy prison terms. Following region-wide protests against Chinese rule that swept Tibet and Tibetan areas in western provinces of China in 2008.

Authorities have also issued orders to Buddhist monks and nuns about using Mandarin Chinese instead of Tibetan.

At a religious conference in Qinghai in September 2021, government authorities issued instructions that Tibetan Buddhist monasteries and study centers had to begin translating classroom texts from Tibetan into Mandarin Chinese, China’s “common language,” sources told RFA in a report at that time.

Monks and nuns were told that they must learn and speak to each other in Chinese instead of their native language, part of Chinese President Xi Jinping’s call to Sinicize religion across the country.