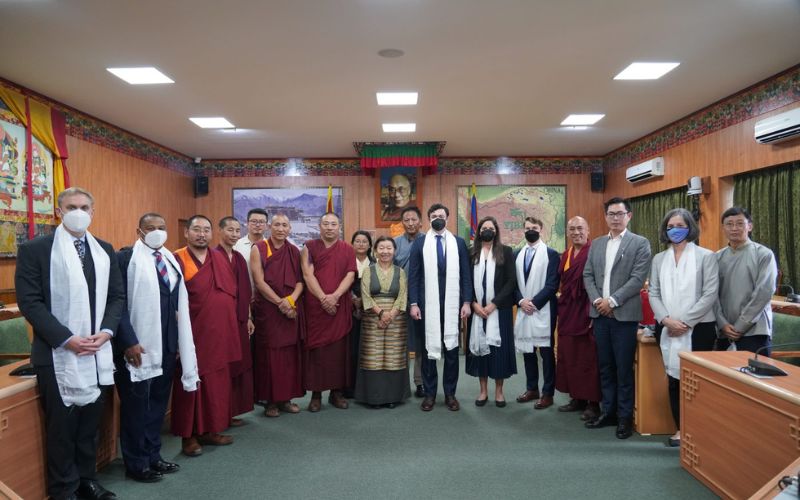 US delegation expresses joy on witnessing the courage of Tibetans

Dharamshala: While visits to Taiwan by delegations of US lawmakers is pretty common, it is few and far between to the exile Tibetan setup at Dharamsala, India, though both are of “One China” policy concern to Beijing. On Sep 3, a delegation led by Democratic Senator Jon Ossoff, on an eight-day tour of India, visited Dharamsala and met with leaders of the Central Tibetan Administration (CTA).

The delegation was reported to have called on His Holiness the Dalai Lama in the morning and later on visited the Tibetan Parliament in Exile (TPiE).

The senator has explained that the purpose of his visit was to understand how Tibetans were keeping alive the flame of the Tibetan struggle in exile which he considered inspiring and encouraging, according to Tibet.net.

The Tibet.net report said the senator expressed joy on witnessing the courage of Tibetans in their effort to sustain a government in exile while also speaking about his meeting with the Dalai Lama earlier in the day.

The delegation’s India tour was aimed at strengthening economic, cultural, and security ties with Indian businessmen and politicians.

Before visiting Dharamsala, the delegation took part in a number of government and business engagements and met with prominent business executives and political leaders, including Maharashtra Deputy Chief Minister Devendra Fadnavis.

Thomas Jonathan Ossoff, 35, has been the senior United States Senator from Georgia since 2021. He was previously a documentary film producer and an investigative journalist. He won the senate seat in a tight race in the previously Republican stronghold. He is also the youngest member of the Senate elected since Don Nickles in 1980.