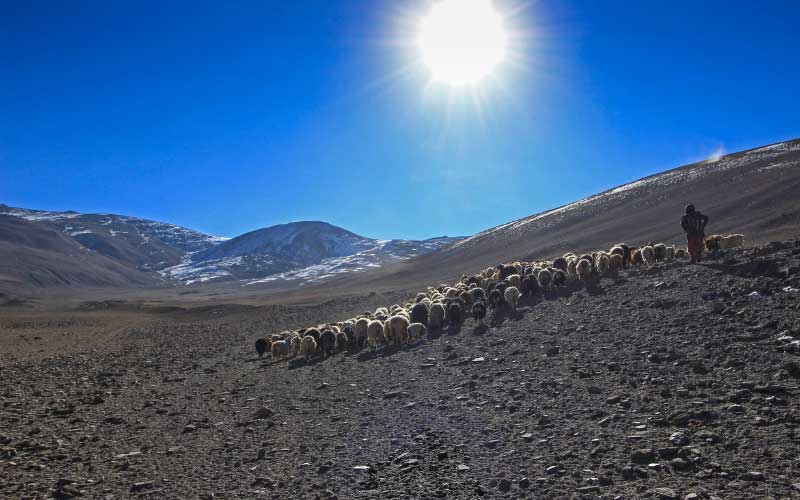 Why Should China Be Called Out for Green-Washing in Tibet

With a landscape of enormous glaciers, massive snow cover, mountains and uplands, Tibet is the world’s largest and highest plateau and a storehouse of freshwater. However, all is not well with the Rooftop of the world. China, which has unlawfully occupied Tibet since 1959, is involved in a number of activities - from damming its rivers to relocating Tibetan nomads - that are destructive of Tibet’s environment. What makes it more worrying is the fact that these are being carried out under the garb of environment preservation. This, we argue, is a blatant display of green-washing. Building on the discussion about green-washing, this piece intends to highlight the implications of certain key Chinese policy initiatives and its instrumental use of green and social claims in Tibet.

The term greenwashing was coined by environmentalist Jay Westerveld to refer to “advertising techniques that are designed to convince consumers that a company or its products and services provide environmental benefits when, in fact, this isn’t true”. The term greenwashing, thus, is the “practice of construing an activity as more environmentally friendly than it really is.” Unfortunately, greenwashing has become more prevalent than ever, and China is ‘greenwashing’ its way into Tibet in more ways than one.

The first instance is that of the relocation and resettlement of Tibetan nomads. Since 2006, CCP has implemented large-scale programs to accelerate the relocation and sedentarization of the nomadic population, viewed by the authorities as ignorant, backward and irrational; whose ‘overgrazing’ caused significant damage to the Tibetan grassland ecosystem. They argue that careless overgrazing and unscientific land management by herders cause grassland degradation, erosion and gradual desertification, which is far from the truth. The traditional grazing practiced by Tibetan nomads is crucial for Tibetan range lands; their technique of moving their herd from summer pasture to winter pasture in a rotational fashion helps avoid overgrazing. This renews grasslands, improves wildlife habitats and helps sustain the Tibetan plateau.

The case of Pika is another related issue that hasn’t received the attention it deserves. Pika is a native small mammal, widely regarded as the keystone species for grassland biodiversity. However, a campaign that characterized pikas as a pest for their habits of eating vegetation and digging burrows underground and deteriorating grassland quality has been underway in the Tibetan plateau for the last 30 years. Recently, China mobilized 10,000 people in the Ngapa area to poison and exterminate marmots from the grassland, claiming that they are causing grassland degradation. The truth is that this pika poisoning project has the potential to poison all the mammals and birds in the ecosystem that the Tibetan plateau sustains.

While the Chinese authorities claim that dams are green, and thus better for the environment than burning coal, China's dams, which it is building to divert water into its own territory, are targeted towards creating a “hydro hegemony” based on the control of the Tibetan plateau. Take for instance the case of Lianghekou hydropower station located in Ganzi Tibetan Autonomous Prefecture. It was estimated that the dam would help reduce raw coal consumption by 13.3 million tons and carbon dioxide emission by 21.3 million tons per year. But beneath this veil of “green energy”, about 6,000 people across four counties were relocated and once it is fully completed by 2023, the Lianghekou dam will reportedly drown ancestral homes, Buddhist monasteries and sacred mountains.

2017 saw the announcement of a policy that said “vast areas of Tibet will be turned into national parks”. But it is contingent upon the removal of Tibetans from their ancestral lands. Accordingly, huge watersheds on the plateau have been declared national parks in an effort to mitigate climate change and offset its reputation as a major world polluter. China announced the displacement of more than 1,000 Tibetans from a nature reserve in northern Tibet in 2018, which it called “high-altitude ecological migration”. This act of driving away nomads from their lands involuntarily to “help degraded landscapes to recover and to improve the living standards of local people” is ironic given that these nomads have been the traditional land managers for thousands of years. These moves are meant only to displace them to give way for mining and damming activities.

“Canary in the Coal Mine”

There are a number of other instances that can be, and should be identified and called out as greenwashing. The Tibetan plateau, as Richard Gere described, is now a “canary in the coal mine”. The Dalai Lama’s home country is undergoing changes with potentially devastating consequences. It is important to realize that the environmental crisis happening in Tibet is not just a regional, but a global issue. Unless the world comes together to hold China accountable for its environmental destruction in the plateau, the rhetoric of greenwashing will continue to wash away the environmental crimes it is committing in the world’s Third Pole.

This op-ed originally appeared in The Global Order on May 9, 2022.