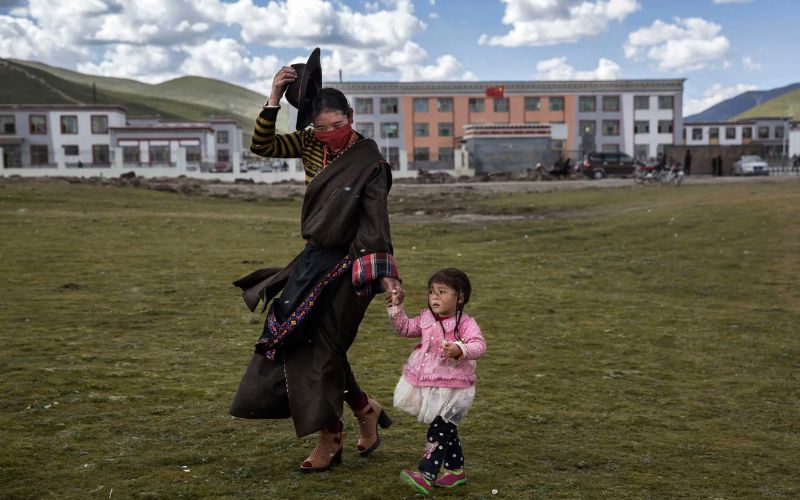 The Standing Committee of the 13th National People's Congress, China's top legislature, started its 38th session Tuesday to review multiple draft laws and law revisions. Among the six drafts that are scheduled to be considered during the upcoming meeting, the draft law on ecological conservation on the Tibetan Plateau is to be submitted for a second instance.

This law, according to Tibetologist Gabriel Laffite, seeks to displace more Tibetan nomads from their landscapes, but does not stop mining either. “In the name of ecological restoration, Tibetans are further demobilised, made to stay put in new border villages, under surveillance”, noted the author.

The legislation keeps mentioning the importance of excluding Tibetan pastoralists from their pastures, because “they are to blame for degradation and desertification”, thus overlooking the important role played by the nomads in maintaining the grassland ecosystem.

It mentions how for “systematic protection and zoning and classification management of national parks, measures such as strengthening grazing prohibition and confinement, and strengthening degraded grasslands” will be taken and how “it is strictly forbidden to damage ecosystem functions or not comply with differentiated management”.

According to Laffitte, the law “is a fantasy of perfect management, perfect risk control, perfect imposition of human will, a nationalisation and Sinicization of Tibetan landscapes by a nation-state empowered by legislation to remove the Tibetan pastoralists and thus restore nature, under the vigilant gaze of the party-state”.

It is also noted that no productive consultation with the key stakeholders -the Tibetans themselves-were held by the lawmakers in the drafting of this law.

A Wildlife Protection Law is also slated to be debated in this National People’s Congress in which caged animal farming industry have managed to insert into this legislation clauses that exempt them from regulation.

CCP has a history of using government policies to greenwash away its crimes. Since 2006, CCP has implemented large-scale programs to accelerate the relocation and sedentarization of the nomadic population, viewed by the authorities as ignorant, backward and irrational; whose ‘overgrazing’ caused significant damage to the Tibetan grassland ecosystem. They are being forcedly resettled in the name of grassland preservation. 2017 saw the announcement of a policy that said “vast areas of Tibet will be turned into national parks”. China announced the displacement of more than 1,000 Tibetans from a nature reserve in northern Tibet in 2018, which it called “high-altitude ecological migration”. This act of driving away nomads from their lands involuntarily to “help degraded landscapes to recover and to improve the living standards of local people” is ironic given that these nomads have been the traditional land managers for thousands of years.

This is to be viewed with caution also because Tibetan plateau plays a central role in the climate change discourse today. Tibet is home to rivers that feed Asia and is the Third Pole. Recent incidents of flash floods and droughts should not be ignored. Rampant construction of dual use infrastructure, hydro dams and uncontrolled tourism have affected the fragile ecosystem, accelerating the impacts of global warming and climate change in Tibet.