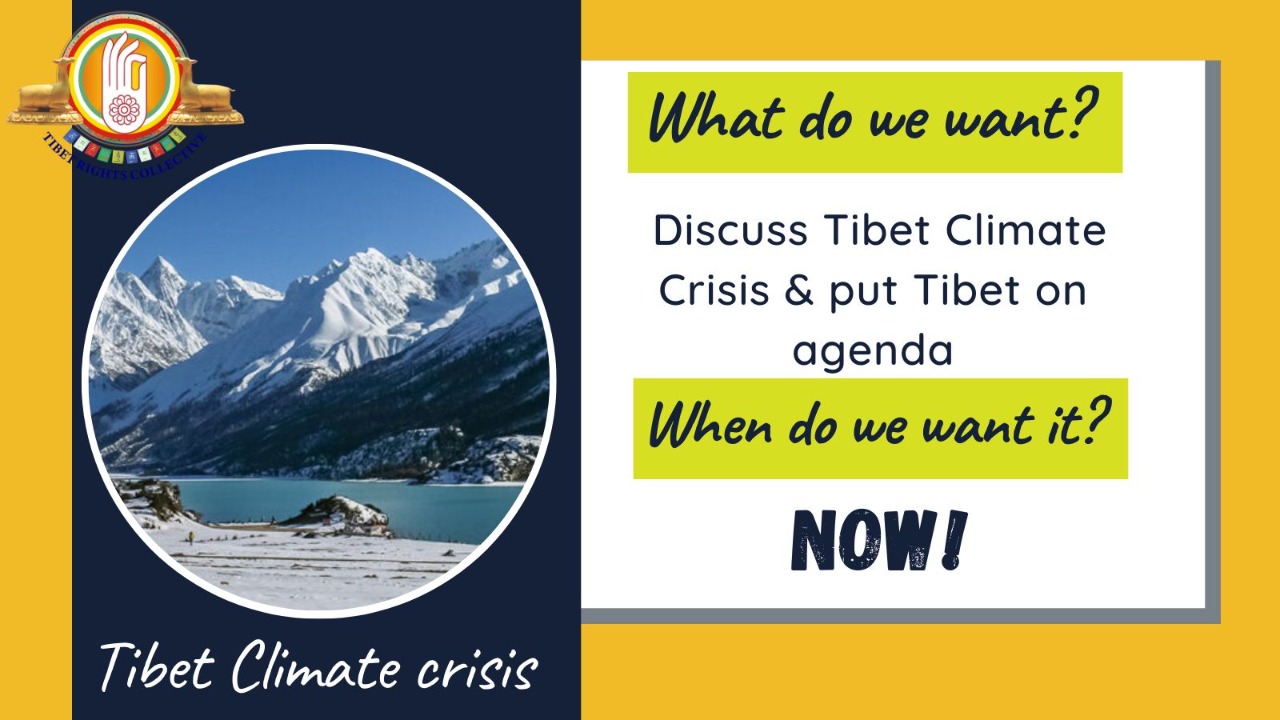 By Jyotsna Jayaram and Tenzin Tseten

"I often joke that the moon and stars look beautiful, but if any of us tried to live on them, we would be miserable. This planet of ours is a delightful habitat. Its life is our life, its future our future.” - His Holiness the 14th Dalai Lama

This is to invite your attention towards a crisis unfolding in the largest and highest plateau in the globe and the location of the third-largest ice cap and the largest accessible freshwater source on earth. It is also the source of six of Asia's greatest rivers which feed the population of ten countries in the region. As the world convenes to discuss the impact of and mitigation of climate change and catalyse action at the upcoming UN Climate Conference, COP27, it is important to discuss the Tibet climate crisis.

The world needs to be aware that China has been illegitimately occupying Tibet since the 1950s. Tibet’s leader His Holiness the 14th Dalai Lama has been living in exile in Dharamshala, India since 1959, where the Tibetan government in exile also operates. Meanwhile, in occupied Tibet, Chinese Communist Party continues to curtail the fundamental rights of Tibetans and Sinicize Tibetan culture, religion, education, language and tradition. Its human rights record in the world’s Rooftop is appalling and it is trying to Sinicize Tibetan culture, traditions, education and language; Tibet was ranked the least-free country in the world by Freedom House recently.

In an attempt to colonize Tibet and exploit its rich natural resources, CCP is destroying its pristine environment and the resulting environmental changes in Tibet are having an impact not just on the Tibetan people but also on those living downstream. China's exploitation of Tibet's land and natural resources has accelerated substantially in recent years. Mining, damming, and deforestation are rampant in Tibet. In the name of “developing” Tibet, CCP is building dual use infrastructure and as a result, pollution is also increasing in the region.

The story of the Tibetan nomads is one of the darkest episodes in the account of the unlawful Chinese invasion of Tibet which, unfortunately, is criminally under-reported. The traditional Tibetan nomadic culture and way of life are under threat as a result of China's push to relocate them from their ancestral grasslands to urban settlements in the name of poverty alleviation and ecosystem conservation. This is ironic given that these nomads have been the traditional land managers for thousands of years. These moves are meant only to displace them to give way for mining and damming activities.

The melting rate of the Tibetan glaciers is concerning. According to a report by the International Center for Integrated Mountain Development (ICIMOD), the climate crisis will cause at least one-third of the region to melt. Recently, a team of researchers discovered approximately 1,000 types of bacteria in snow and ice samples gathered from Tibetan glaciers; with global warming accelerating glacial melt, if the harmful bacteria get released, it could spell trouble for those dependent on Tibet's water sources.

The Tibetan plateau is expected to lose a significant amount of water owing to global warming this century. According to research published recently, due to an increasingly warm and wet climate, the Tibetan Plateau has lost just over 10 billion tonnes of water a year since 2002.

The Chinese authorities maintain a tight information blockade and control the flow of information from and of occupied Tibet and deny entry of journalists, civil society and Tibetans in exile to Tibet. At the same time, CCP projects Tibet as their poster child for Han tourism and the inflow of tourists has caused pollution and garbage crisis in the region.

Extreme climate events have been reported from Tibet recently, which point towards the accelerating effects of global warming in the plateau.  A 6.8-magnitude earthquake jolted Chagsam) county in eastern Tibet on September 5, 2022 which left many killed and missing. While flash floods hit the Amdo region in August 2022, authorities declared an orange alert for drought as heatwaves persisted in multiple regions of Tibet.

Despite the risks, Tibetans within and outside Tibet continue to struggle for environmental protection of their homeland. A-Nya Sengdra, a Tibetan nomad and environmental activist from eastern Tibet, was arrested and charged on false charges linked to his peaceful activism as an environmentalist in 2018.

A team of Tibetan environmentalists was there in Glasgow to represent Tibet at the COP26. The ‘COP26 Team Tibet’ highlighted the global ecological importance of the Tibetan Plateau and strongly urged world leaders to make the Tibetan Plateau central to any global climate change discussion. They also handed the ‘5-Point Call to Action for Tibet’ leaflets to the prominent personalities and other delegates. The '5-Point Call to Action for Tibet,' first drafted in 2015 for the COP21, had five specific demands for the protection and understanding of the Tibetan Plateau. However, COP26 failed to highlight the issue of Tibet fittingly and COP27 is an opportunity that we cannot afford to lose.

The human rights situation in Tibet is quite worrying too. Recently, reports of Chinese authorities collecting DNA samples from Tibetans, including children, without consent had been released by Human Rights Watch and Citizen Lab. This revealed the extent of intense state surveillance and repression Tibetans are subjected to under the authoritarian CCP regime. Some videos revealed the impact of CCP’s harsh Zero-COVID rules on Tibetans and the unfair treatment meted out to them in isolation centers.

Conference of Parties 27 is an opportunity for leaders like you to raise the issue of Tibet and urge others to make Tibet central to any discussion on global climate change.  This year marks the 30th anniversary of the adoption of the United Nations Framework Convention on Climate Change and it is important that it acknowledges the key role that the Tibetan plateau plays in the climate change discourse. Because, as the Dalai Lama aptly observed,  "The threat of climate change is not limited by national boundaries, it affects us all."

As leaders and stakeholders convene in Egypt in November 2022 for COP27, we urge you to amplify our voices so that world leaders listen to them, realize the significance of addressing the issue of Tibet and holding CCP accountable for the crisis.