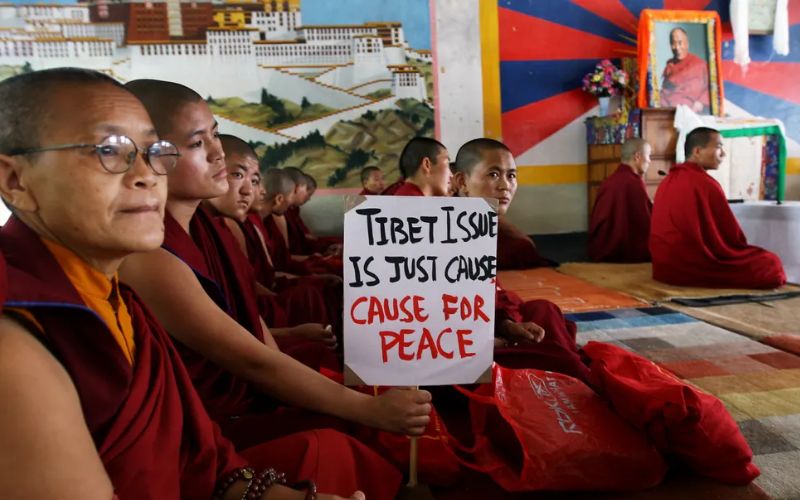 By Tenzin Tseten and Lakshmi P

The United Nations General Assembly has designated 22nd August as the International Day Commemorating the Victims of Acts of Violence Based on Religion or Belief, deploring the “widespread violations suffered by individuals, and persons belonging to minorities, who are targeted on the basis of their religion or belief”. The 1981 UN Declaration on the Elimination of All Forms of Intolerance and of Discrimination Based on Religion or Belief ensured that “no one be subject to discrimination by any State, institution, group of persons, or person on grounds of religion”. Today, we seek to invite the attention of the world to what is happening in Tibet – the world’s Rooftop, unlawfully invaded by China and currently under its control – and how the religious freedom of its inhabitants is being ignored and violated.

Tibetan Buddhism has a legacy that has captured the imagination of the world and continues to inspire people across the world. His Holiness the Dalai Lama, Tibet’s exiled leader is revered by millions of followers who look up to him as a philosopher of peace, non-violence and universal responsibility. However, Chinese Communist Party is on a mission to destroy the essence of Tibetan Buddhism and make it Chinese in orientation, primarily to legitimise its claim over Tibet and thus strengthen its hold over the plateau which is strategically significant not just for China, but entire Asia.

In what reminds one of the Taliban’s destructions of the Bamiyan Buddhas, Chinese authorities have been involved in a destruction of structures associated with and revered by Tibetan Buddhists. Since December 2021, they destroyed three Tibetan Buddhist statues. A three-story statue at a monastery in Drago had been destroyed in early January 2022, only weeks after the authorities toppled a 99-foot Buddha statue just 900 meters (2,700) away. Later the government demolished the Tibetan Buddhist statue Padmasambhava, built six years ago at the Chanang Monastery in Drago County of the Kardze in Tibetan Autonomous Prefecture. Since the invasion of Tibet and Cultural Revolution, many monasteries were destroyed and monks ousted; Larung Gar, the ‘Tibetan City in the sky’ being one among them.

Interference in reincarnation of Dalai Lama

In 1995, His Holiness the 14th Dalai Lama recognised Gedhun Choekyi Nyima as the 11th Panchen Lama. What followed was his abduction by the family authorities and no details of his whereabouts are known till today. He is the youngest known political prisoner of the world. Instead, Gyaltsen Norbu was recognized as the ‘official’ 11th Panchen Lama by the Chinese government in 1995. This attempt to control the institution of the Panchen Lama has gained strength in recent times with Gyaltsen Norbu visiting areas of Tibet and giving lectures on Sinicization of Tibetan Buddhism. The aim is to project him as the face of Tibetan Buddhism and thus provide legitimacy to Chinese rule in Tibet.

CCP is also aggressively focussing on controlling the process of and narratives around the reincarnation of the 14th Dalai Lama. A rule that makes any choice of reincarnation to be approved by CCP has also been passed. The control is being exerted in two diverse ways – one, building global credibility and support through its Faith and Buddhist Diplomacy on the foreign front and works of UFWD in the domestic front. Two, by downplaying and attacking the influence and aura that Dalai Lama enjoys among the Tibetans inside and outside Tibet. To this end the authorities arrest Tibetans for even keeping a picture of Dalai Lama (who they consider a separatist/ splittist)  in phone or celebrating his birthday or even creating social media groups where any discussions remotely connected to the exiled leader happen.

In his first visit to East Turkestan (Xinjiang) region (where CCP is accused of running detention camps for Uyghurs and committing human rights violations), Chinese President Xi Jinping mentioned that Islam in China must be "Chinese in orientation." "Enhanced efforts should be made to uphold the principle that Islam in China must be Chinese in orientation, and to adapt religions to a socialist society," he said. This is the same policy that CCP is assuming towards Tibetan Buddhism too. The aim is to “adapt” Tibetan Buddhism to Chinese socialist characters. Addressing the national conference of religious affairs in December 2021, Xi emphasised the importance of “upholding the principle of developing religions in the Chinese context”. Xi’s much celebrated visit to Lhasa coinciding with CCP's 100th anniversary last year in July also reinforced the aim of China to build Tibet into a socialist entity with Chinese characteristics to achieve national rejuvenation.

This policy is echoed by China-appointed Gyaltsen Norbu’s speeches as well. In March 2021, in an interview, he said that “Tibetan Buddhism will adapt to the conditions of a socialist society with Chinese characteristics and move towards Sinicization”. As President of the Tibet branch of the Buddhist Association of China and vice president of the Buddhist Association of China, he has been on a visiting spree lately- he has reportedly visited villages, met Tibetans in monasteries where he gave lectures and attended seminars on Tibetan Buddhist doctrines. Chinese media projects him as “one of the most influential Living Buddhas in Tibetan Buddhism”. He, along with institutions like Buddhist Association of China, are being used as a tool to build inroads into Tibetan Buddhism and even prepare grounds for projecting him onto the reincarnation scenario, as China’s (which ironically, is an atheist nation) potential candidate.

Such acts of violent attacks against Tibetan Buddhism are to be seen as part of Xi’s larger plan to turn his country into “the biggest player in the history of the world.” Tibet is the water tower of Asia and sustains the population of around 1.4 billion people. In a world threatened by global warming and climate change and potential water shortage, Tibet is significant. It is a blue dot in an island of heat and a key to future. China wants to strengthen its hold over Tibet and its misappropriation of Tibetan Buddhism is an instrument towards this end.

In combating such incidents of intolerance and discrimination against Tibetans on the basis of their religion or belief, the civil society and world organizations should play a more active role. When UN Human Rights Commissioner Michelle Bachelet was on a visit to China earlier this year, she chose not to visit Tibet, despite many calling up on her to pay a visit to the region where children are forcefully admitted in colonial style boarding schools where they are denied religious education, where nomads are removed from their traditional lands to concrete settlements and are subjected to propaganda education and monks who speak up for the language and religious rights of Tibetans are detained and tortured in jails.

Today, when the world remembers those who lost their lives to acts of violence based on religious belief, let’s also talk about Tibet and China’s war against Tibetan Buddhism.