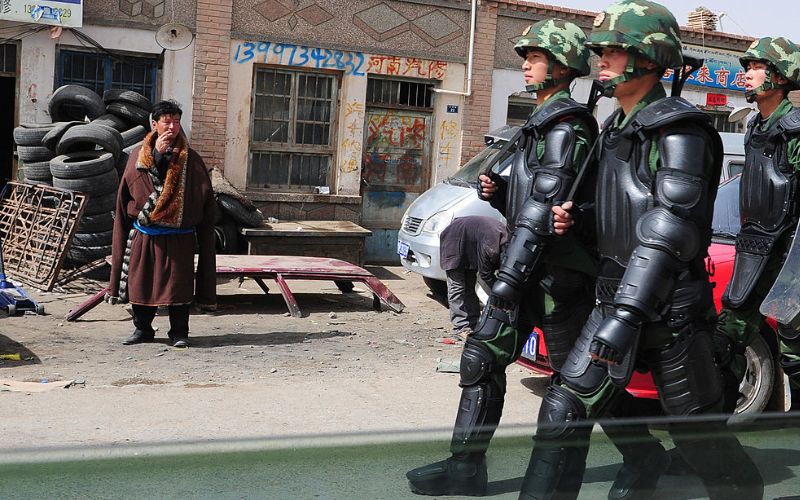 From Colonial Schools to DNA Collection: Time for a Fact-Finding Mission to Tibet

Two key events that transpired last week have brought the attention of the world, albeit for a short time, on Tibet again. One when Michelle Bachelet, the outgoing United Nations Human Rights Chief published the much-awaited report on Uyghurs in Xinjiang region of China, minutes before her term ended on August 31st. Two, when a new Human Rights Watch Report provided new evidence of mass DNA collection in Tibet.

While Bachelet’s decision to not visit Tibet during her China visit despite multiple appeals and her silence about Tibet were questioned and her uncertain Tibet legacy was put under the scanner, the HRW Report highlighted how the Chinese authorities have increased policing, including arbitrary collection of DNA from residents in many towns and villages throughout the Tibet Autonomous Region (TAR). Before the storm ends and the world goes back to conveniently forgetting Tibet, let us raise a call for an independent fact-finding mission with unhindered access to Tibet.

Fact-Finding Missions to Tibet so far

The first delegation was headed by Thupten Namgyal Juchen, the then Kalon of the Information Department and Security Kalon Phuntsok Tashi Taklha led the delegation to Tibet in 1979. The delegation documented the poor living conditions of Tibetans and total destruction of religious structures. The second delegation which was headed by Tenzin N Tethong (Representative of His Holiness the Dalai Lama to the Americas), and Tsering Dorjee (Representative of His Holiness the Dalai Lama in Switzerland) visited Tibet in 1980. Following demonstration of support by Tibetans for Dalai Lama in Lhasa, China asked the delegation to cut short their visit.

The third delegation to Tibet took place in 1980 under the leadership of Jetsun Pema, the younger sister of His Holiness the Dalai Lama to examine the state of education in Tibet, which concluded that the standards of education in Tibet was low, despite Chinese claims. The fourth delegation visited Tibet in 1985 was led by former Kalon Tripa Woeser Gyaltsen Kundeling.

Much has changed in Tibet since 1985. Attempts to Sinicize Tibet have strengthened, more Tibetans have immolated themselves to death to protest against Chinese policies and monasteries and Buddhist structures have been destroyed. CCP has reinforced surveillance in Tibet and has enforced a total information blackout which has made any free flow of information from and to Tibet next to impossible. With an aggressive CCP trying to control even the narratives of Tibet, an independent, impartial fact-finding mission is indispensable.

What are the key issues to be addressed?

The case of colonial boarding schools in Tibet is a central issue that needs to be questioned. According to a report published by Tibet Action Institute, an estimated 800,000 to 900,000 Tibetan students aged six to 18, as well as an unknown number of four and five-year olds, are in these state-run schools in Tibet. The report observed that these schools are “a cornerstone of Xi Jinping’s campaign to supplant Tibetan identity with a homogenous Chinese identity in order to neutralize potential resistance to CCP rule”. In fact, these schools are one among the many tactics used by CCP towards this end.

The new HRW report pointed towards DNA collection drives by CCP among Tibetans in and outside Tibetan Autonomous Region – from children as young as five years old without consent! This, according to the report, is part of what CCP calls “The Three Greats” drives, which involve data collection about every individual within a village which will give the authorities a powerful tool for their high-tech surveillance state.

Instances of destruction of Buddhist structures and statues have increased in a renewed crackdown against Tibetan Buddhism, culture and identity. Experts have called it a renewal of “Cultural Revolution” like activities in Tibet. In January 2022, the authorities demolished the Tibetan Buddhist statue Padmasambhava, built six years ago to stamp out the Tibetans’ religious traditions.

After the 10th Panchen Lama’s death in 1989, the 14th Dalai Lama had identified 6-year-old Gedhun Choeki Nyima as the 11th Panchen Lama. Subsequently, the People’s Liberation Army abducted the 6-year-old Lama and his family, with their whereabouts still unknown to this day. Instead, Gyaltsen Norbu was recognized as the ‘official’ 11th Panchen Lama by the Chinese government in 1995 - a move since then decried by His Holiness the 14th Dalai Lama and the Tibetan community alike. A fact-finding mission should focus on holding China accountable for the disappearance of Tibet’s Panchen Lama. CCP is also aggressively focussing on controlling the process of and narratives around the reincarnation of the 14th Dalai Lama.

The fact-finding mission should also hold China accountable for the arbitrary detentions happening inside Tibet. A 2021 report by the United States State Department on the PRC’s aggregated ongoing human rights violations of Tibetans by the PRC in Tibet, including torture, arbitrary and secret detentions, disappearances, and violence. It detailed many cases of arbitrary deprivation of life and other unlawful or politically motivated killings.

We believe that a mission to Tibet should also take into account CCP’s “environmental policies” in Tibet given that Tibet, Asia’s water tower and the world’s Third Pole is at the centre of climate change discourse and rampant greenwashing is happening in Tibet. The first instance is that of the relocation and resettlement of Tibetan nomads. Since 2006, CCP has implemented large-scale programs to accelerate the relocation and sedentarization of the nomadic population, viewed by the authorities as ignorant, backward and irrational; whose ‘overgrazing’ caused significant damage to the Tibetan grassland ecosystem. While the Chinese authorities claim that dams are green, and thus better for the environment than burning coal, China's dams, which it is building to divert water into its own territory, are targeted towards creating a “hydro hegemony” based on the control of the Tibetan plateau. huge watersheds on the plateau have been declared national parks in an effort to mitigate climate change and offset its reputation as a major world polluter.

Why Now is the Time

The international community should join our call to the United Nations to send a fact-finding mission or a special investigator to Tibet since even as we talk about it, Tibetans are subjected to human rights abuses, which are kept in the dark. Awareness about the crisis unfolding in Tibet is surprisingly low and if we don’t talk about Tibet now, CCP will erase an entire nation’s past, present and future. Join our call for an independent, unhindered, unorchestrated mission to Tibet.